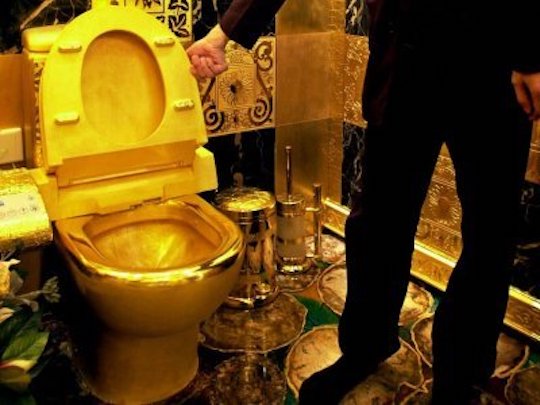 Yesterday evening, the internet lit up with news that a former British intelligence operative claimed to have proof that Russian intelligence gathered kompromat1 on president-elect Donald Trump, in the form of both financial documents and a video of Trump in a hotel room watching two prostitutes urinate on each other. I think we can agree that is the greatest, most luxurious sex act in the world. Also, I probably shouldn’t have used the word “news” in the first sentence of this post. The memo describing this kompromat has been circulating in the intelligence community and among journalists for months. Yesterday afternoon, CNN reported that intelligence agencies had informed Trump that the Russians had compromising information on him. Their willingness to treat the kompromat story as legitimate seems to have inspired Buzzfeed, which released the two-page memo “so that Americans can make up their own minds.”

Letting readers make up their own minds about unsourced counterintelligence reports might be the epitome of contemporary journalism. Since Buzzfeed dropped the documents, several reasons to doubt them have emerged. They were prepared as opposition research originally commissioned by opponents of Trump in the Republican primary, then re-sold to the Clinton campaign. Trump’s attorney Michael Cohen, who the documents claim accompanied Trump to a meeting with Russian agents in Prague, says he was on a college visit with his son on that date. And the ostensible motive behind the act—President Obama and the first lady had stayed in that Russian hotel room, so Trump wanted to defile the bed—does not make a lot of sense.

But man, I wanted to believe it. As the inauguration draws nigh, this story seemed like our last chance to pull the rip cord. And what a perfect end! Apolitical, humiliating, and beyond the pale of what even the most forgiving Republicans could tolerate—if the Russians had video of Trump paying prostitutes for a golden shower, he would have to resign. We would wake suddenly from our long national nightmare and only have to contend with the tedious national mass of a Mike Pence presidency.

It’s probably not true. Still, there is something appealing about the idea of Trump being dogged by an unsubstantiated rumor. Can he prove he didn’t pay Russian hookers to urinate on each other? Until he produces his long-form urine certificate, many people will continue to ask questions. Trump’s path to the presidency has run through a steady traffic in rumors and lies. Wouldn’t it be nice if he had to disprove an absurd conspiracy theory someone else made up about him?

It would be if the makers-up weren’t us. It’s tempting to indulge in the same behavior for which we contemn Trump and fight fire with fire, but we’re supposed to be the fire department. Organizations like Buzzfeed and CNN are not the top tier of journalistic integrity, but they’re not the Breitbart basement, either. To see them attack him with thinly-sourced rumors is to consider the depressing prospect of news media adopting the same standards as Donald Trump.

That’s what he wants. The purpose of Trump’s approach to rhetoric is not to deceive; it’s to convince people that true and false are irrelevant terms. To paraphrase Harry Frankfurt, the difference between the liar and the bullshitter is that the liar still puts value on truth, if only as an effect to simulate. The bullshitter wants to dispense with truth and lies entirely, shifting our terms of evaluation to what sounds good, what people remember, what works. Those are the areas were Trump’s advantages lie.

As tantalizing as yesterday’s leak was, it also gives us a sobering glimpse of a news media that operates like him. That’s not what we want. Trump is a threat to this country not by who he is but what he does. If we resort to doing the same things to bring him down, we have only worsened the problem. I want to believe that Russians have video of Trump paying hookers to urinate on each other, and that the US intelligence community can prove it in some way that will force him to step down. But it probably isn’t true, and we only want to believe what’s true. That’s the difference between us and him.