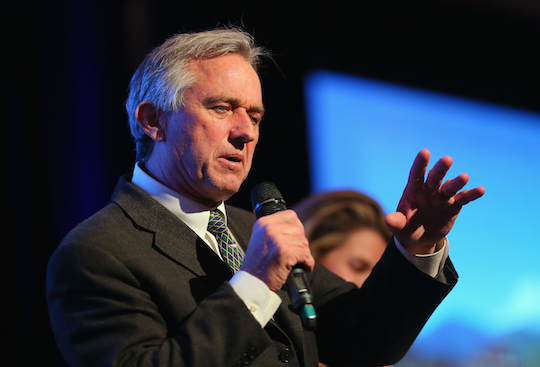 Good news, everybody: President-elect Donald Trump has reportedly asked Robert F. Kennedy, Jr to chair a federal commission on “vaccine safety and scientific integrity.” In addition to being one of the original Robert F. Kennedy’s 11 children, RFK Jr. is an activist who believes vaccines cause autism—an idea that has been roundly rejected by scientists and doctors, found to have no merit in dozens of experimental trials, and traced to one article published in Lancet 20 years ago and subsequently retracted. But what do scientists know? How many of them are Kennedys? Fucking none, that’s how many—not one Kennedy has become a scientist, because science sucks. It’s not because they couldn’t do it. Why, RFK Jr. himself went to Harvard, even after he flunked out of Milbrook. He’s just naturally right about things, the same way he is naturally rich: by being a Kennedy. I quote the Washington Post:

Yeah, when are people going to start reading and debating science? We’ve left the science behind vaccines to doctors and scientists for too long. It’s time to get some famous rich people in there to straighten this out and decide whether polio should come back.

It’s like when you’re trying to run the world’s most powerful government. You don’t want a bunch of people who have worked in government before. You want a famous rich person, whose father was also rich, to bring the unique insights that only famous rich people have. In these times of national crisis, Americans want a TV show host who lives in a gold house, not some egghead Secretary of Whatever. The same goes for science. If scientists know so much about what does and does not cause autism, how come I don’t recognize any of their names? Like Peter Hotez, dean of the National School of Tropical Medicine at Baylor College of Medicine, also quoted in the Post:

“That’s very frightening. It’s difficult to imagine anyone less qualified to serve on a commission for vaccine science. The science is clear: massive evidence showing no link between vaccines and autism, and as both a scientist who develops vaccines for poverty related neglected diseases and the father of an adult daughter with autism, there’s not even any plausibility for a link. Autism is a genetic condition.”

Who is that? Am I to understand that he is not even Peter Hotez, Junior? Now Robert F Kennedy, Jr.—there’s a name you can trust. With Kennedy, you know you’re getting the scientific expertise that comes from working as an office assistant for “family friend” Robert Morgenthau, passing the bar on the second try, getting disbarred one year later for drug abuse, and then getting readmitted to the bar a year after that. From there it’s a natural segue to three decades as a water-quality activist, until whammo—head of a federal commission on vaccine safety.

That’s the American way. We live in a democracy, and that means anyone can grow up to become a scientist—even people who have not studied science. In this country, it doesn’t matter what kind of “qualifications” you have. It doesn’t matter that you are a failed lawyer promoting a theory that millions of actual scientists and doctors have unanimously rejected. That kind of cronyism is not how America works. Only one thing matters here: who your parents are. That’s what the Founding Fathers intended, and it’s why they weren’t called the Founding Peers.

Anyway, I can’t wait to die of mumps because a Kennedy’s junkie son heard vaccines make you autistic. My only regret is that it will prevent my second-greatest wish, which was to spend the rest of my life watching the United States slide into authoritarianism after making a game show host president. I sure am glad ordinary Americans are rising up to wrest power away from scientists and elected officials to give it to rich people’s children they recognize from TV. This was how I hoped my lifetime and my country would go: the rich get richer, print goes out of business, and everyone gets so smart they don’t need to know anything. What a time to be a plebe.