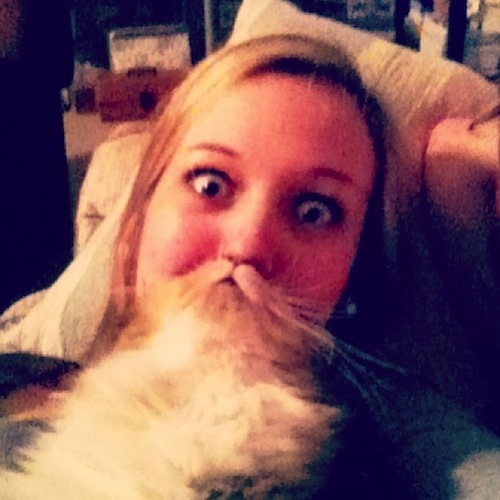 It’s a cat. It appears to be a beard. Catbeard!

Seen from one angle in a two-dimensional image, a cat looking upward to smell its owner’s face looks like a beard. Seen from another angle, it looks like a person at risk of catching ear mites. If you told Francis Bacon or whomever that images of housecats blocking the lower parts of their owners faces would one day delight millions of people, he would say, “Zounds! Accost me not, gypsy! Forsooth!” He just doesn’t have the interpretive framework. Today is Friday, and so much depends on point of view. Won’t you cherish and/or shatter your illusions with me?

By “your point of view,” I of course mean the point of view inherited from previous generations and reinforced by media at all levels. For example:

“You gotta thank the lord, right?” Wolf Blitzer says to the woman holding her baby in the wreckage of a tornado. “Do you thank the lord for that split-second decision?” Unpacking Wolf Blitzer’s on-air remarks is like organizing your calendar around a fortune cookie, but let’s consider what he’s saying, here. This woman should thank god for her decision, which led to a weather phenomenon only killing other people. God is great, you guys. Either that or “thank the lord” is a meaningless expression that people use without thinking. Or I’m a jerk. You don’t have to choose just one.

Speaking of phenomena that both blow and suck, former White House press secretary Robert Gibbs has criticized Maureen Dowd’s column in the New York Times. You know you’re in trouble when a professional hack calls you a hack. Quote:

I don’t normally read Maureen. I don’t largely because it’s sort of largely the same column for the last, like, eight years.

Remind me to start using “largely” as an intensifier, so that my remarks take on the vague, statistical quality of prognostication. Also, remind me to publish a jumble of puns and pop culture references every week in the most respected newspaper in the world, instead of, you know, here.

Meanwhile, among people who construct arguments, Dr. Johnny Benjamin has risen above his porn-star name to make a well-reasoned case against the use of testosterone replacement therapy among pro fighters. For those of you who do not follow MMA, 1) you are crazy, and 2) the man who did this last weekend is 36 years old. He tested positive for steroids in 2006. Now he regularly receives doctor- and UFC-approved injections of synthetic testosterone, ostensibly because his natural testosterone levels are abnormally low. Also, he only fights in Brazil. Mixed martial arts is a young sport, and now is the time to resolve its doping problem.

That’s what happens when you hire a real goddamn actor for your mattress store commercial. Curt Bouril, ladies and gentlemen: just as dashing as he was ten years ago. Everyone else who appears in the following video is now dead.