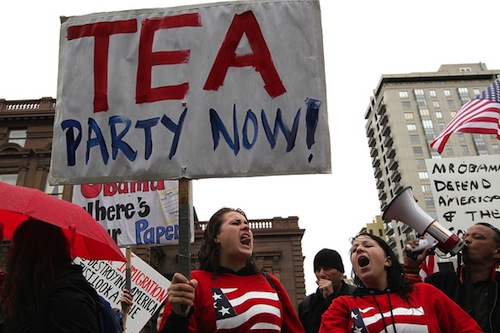 Before we go much further with that question and/or declare that the republic is doomed, we should acknowledge the possibility that the Ohio Liberty Coalition and other groups like it made honest mistakes. As the Times charitably put it, they may have been “confused or misinformed” about IRS rules. Maybe a sensible person—one who is smart and competent enough to become the leader of a social welfare organization—could read section 501(c)(4) of the tax code and decide that knocking doors for Romney is not political.

It seems implausible, though. If you don’t think handing out campaign literature is political, then what is? Zawistowski claims that he thought the IRS only cared about radio and television advertisement, but that explanation suggests he is more focused on which rules will be enforced than he is on following the letter of the law. If nothing else, he seems willing to bend its spirit to the extreme.

Here we encounter the problem of patriotic mendacity. As my friend Andy pointed out on Facebook, you could argue that agitating for lower taxes is, by definition, to work for social welfare. Under that reasoning, however, virtually any expression of deeply-felt political conviction becomes charity work. In theory, at least, we all believe our political views help the country. That’s what American politics is: a system for arbitrating our conflicting views about what’s best for America.

Yet the distinction between what’s politics and what’s social welfare remains intuitively obvious, at least in cases like the Ohio Liberty Coalition. Like art or pornography, we know it when we see it. Also like art and pornography, though, the visceral distinction between politics and charity is vulnerable to dishonest argument. Who’s to say that the photographs in Hustler aren’t art?

The impossibility of making such distinctions according to concrete criteria is evident in the IRS scandal. One way to do it would be to look for words like “Tea Party.” We know the Tea Party is a political organization. But can we say how we know that? Only a jerk would insist that the Tea Party is primarily not a political group, but contemporary America has jerks aplenty. So how do you refute that claim?

Intense conviction magnifies that problem. Say what you will about the Tea Party—they seem like true believers. If you are convinced that the United States writhes in the grip of tyranny, and that taxes are the primary expression of that tyranny, are you going to have an ethical problem with lying to the IRS? Asking the Tea Party to accept the intuitive distinction between politics and social welfare work is asking them to consider that their core beliefs might be mistaken.

I submit that the signature feature of contemporary politics is the refusal to consider that possibility, on both the individual and national level. We see it in a political discourse that increasingly accepts misinformation and personal attacks as the cost of doing business. We see it in national policies that accept torture and targeted killing as means justified by the virtue of American ends. It is the kind of thinking that is so certain of its own rightness as to decide that old rules of fair play do not apply. And it is corrosive to democracy.

Not everyone thinks that conservative politics is social welfare by definition. We don’t all believe that our security from terror is so important as to justify torture. These are the kind of disagreements that inevitably crop up in the management of a nation, and democracy is a system for settling them. It only works if we are willing to accept the possibility that we might be wrong, or at least not so right that we can ethically overpower one another by whatever means are available. We have to concede to certain rules. Once we are willing to claim with a straight face that, say,  handing out campaign literature is not a political activity, the whole project is lost.