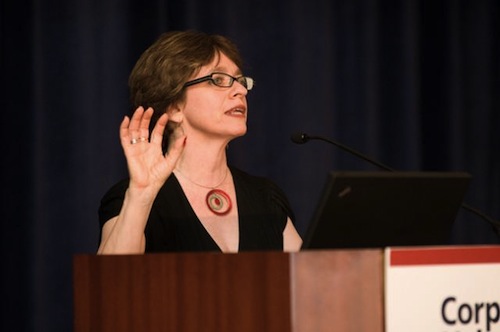 First, the facts: Chai Feldblum, whose name is totally not made up, is a former Georgetown law professor who was named to the federal Equal Employment Opportunity Commission as part of a series of recess appointments the President made Saturday. Because she is a lesbian who has publicly supported gay rights in the past—and, presumably, privately supported them in arguments over who has to take out the garbage—Feldblum will likely enforce the Employment Non-Discrimination Act, which prohibits discriminatory hiring on the basis of sexual orientation or gender identity. Or, as Fox’s unsigned article puts it, conservatives “worry that she’ll strip religious rights from schools and businesses and ‘revolutionize’ social norms in the workplace.”

I think I speak for everybody when I say that I can’t wait for this federal non-discrimination committee to revolutionize social norms. Thanks to Chai Feldblum, we’ll all soon be eating with our hands and wearing crotchless sarongs to work, where we will greet our boss by licking at his earlobes.*

Exactly whom the quotes around the word “revolutionize” came from is unclear, but somebody besides FoxNews.com must have said them, right? A news article derives its authority from its sources. The two direct quotes this story provides as evidence of “conservative worry” come from Andrea Lafferty, of the Traditional Values Coalition, and Shari Rendall of Concerned Women for America. The latter opines that Feldblum is “way beyond what most Americans would consider mainstream,” which is hilarious coming from an organization whose website features this article.

And that’s it. Until the second half—when we get a series of quotes from Obama administration officials praising Feldblum’s competence and experience—the rest of the “news” in this news story is attributed to “some conservatives,” “a host of conservative groups,” “social conservatives” and “Feldblum’s critics.” Of course, those critics reside primarily at Fox News. When they worry that “employers will be forced to make decisions that conflict with their religious or moral beliefs,” we can accept that A) Fox News commands the technology and reportorial staff to make it aware of the apprehensions of conservatives on a national scale or B) we are looking at the apprehensions of Fox News.

Here lies the genius of the organization. Fox so consistently presents the news through a lens of political bias, and that bias is so consistently conservative, that it has achieved a sort of news/opinion synthesis nirvana. News and editorial are one at Fox, and Fox is one with everything, presenting its opinion about an obscure EEOC nomination as the newsworthy response of “conservatives.” Borrowing a technique from Styles of the Times-type trend reporting, Fox has learned to source its opinions to “many” and “numerous” and “a host of.” By doing so, it’s gained the power to magically turn any notion into news.

There is a reason, of course, that the only two quoted opponents of Feldblum are right-wing nutjobs. The Employment Non-Discrimination Act is a federal law that we all voted on, at least by proxy, and the fear that Feldblum might enforce it is the fear that she might do her job. John Boehner isn’t in this story—despite appearing to have an opinion on virtually every event of his and your waking life—because mainstream conservatives don’t care about it. Responsible people aren’t attacking Feldblum, because a responsible person wouldn’t criticize a newly-minted federal official on the grounds that she is likely to execute the duties of her office. It’s a non-issue.

Or at least it is now, until enough people start talking about it. The danger inherent in Fox News is not that they make news into opinion; it’s that they make opinion into news. The Feldblum “story” is an example of the way that Fox can use its sheer enormity to inject ideas into the national conversation. A responsible news organization has journalistic ethics to prevent it from doing that, but Fox is not a responsible news organization. It’s a gossip, and like any gossip, half of what it says it heard it just made up itself.