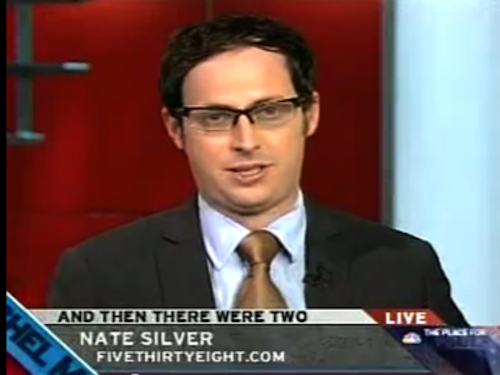 Nate Silver, who writes the FiveThirtyEight blog in the New York Times. You’d never seen him, had you? I’m going to keep picturing him as Mike Sebba.

If you’re like me—and god help you if you are—you still kind of can’t believe that Mitt Romney won last week’s debate. Clearly he did, if “winning the debate” means “making people like him way better based on what they saw.” Nate Silver, scrupulous author of the FiveThirtyEight polling blog, says there is “some evidence” to suggest that Romney surged as much as six points after his wide-eyed frenzy in Denver. For those of us who insist that “winning the debate” should mean “making convincing arguments supported by evidence,” this news is incredible. He lied his ass off. The American people are smarter than that. And yet, if you believe the incredibly credible Silver, Romney continues to “rocket forward” in predictions.

Yet, Mr. Silver tells us, he also remains within the margin of error in most polls. Here we come upon the maddening compound uncertainty of public opinion: it’s not just that we don’t know whom people will like in November; we also don’t know whom they like now. Polls are notoriously not-predictive. Remember in 2004, when exit polls had John Kerry beating George W. Bush in a landslide? Those polls asked people whom they thought they would vote for after they had actually voted, and they still didn’t know.

Say you are a politically engaged, reasonable person recently in possession of a full set of lifelike teeth, and you think Barack Obama won the debate. You woke up the next morning to the news that Romney smashed ’em—that it was a game-changer, he debated so good, even though all the analysts agree that to anyone listening carefully, he came off as an asshole. They also agree, though, that the American people will eat it up.

Those analysts, you say through your full, pert lips, always underestimating the American people. But over the next week—as “Romney wins debate” thoroughly dominates the news—polls show that the candidate everyone dismissed as dead is right back in the race. One debate, which approximately 20% of the American people actually watched, has apparently doubled Mitt Romney’s chances of winning the presidency in November.

It’s weird, because no one you know changed his or her opinion. In response to a debate whose reported outcome you disagree with, however, the whole damn course of American political potentiation seems to have changed in a week. I submit that there are three ways to respond to this experience:

Option (1) is clearly the most reasonable course of action, and I advise you to totally go ahead and do it with your deepest heart of hearts. I’ll wait. Options (2) is easier, even after you read Silver’s long—so long—assessment of why certain polls should be under- or over-weighted and aggregated and otherwise statistically cooked. FiveThirtyEight is a lot more right than other predictive instruments, but it is still only a weather report. The weather report is both useful and pretty much always wrong.

Option (3), on the other hand, is both tempting and something the responsible American spends his time guarding against. Maybe large swaths of the American public have decided that the billionaire investor son of a millionaire governor is a more dynamic and competent human than the black guy who was 75% abandoned by his parents and went on to become a Harvard professor who killed Osama bin Laden. Apparently, they believe this because the billionaire displayed more energy one night on TV.

It’s maddening, and the only refuge is to declare those people stupid. They should not be running the country, and a good politics would prevent them from doing so. Otherwise, we are in a rowboat captained by a mongoloid trying to jump the horizon. In a situation like that, the choice is between mutiny and death.

I submit that such is the attitude many people adopted when Barack Obama was elected president. Probably, they forward you emails. For these people, the idea that America would elect a one-term senator whose middle name is “Hussein” over the war hero Time magazine once called the most trusted man in America cannot be compassed. Obviously, the lunatics had taken over the asylum, and the only course remaining was to decide who was sane and jab everybody else with Thorazine. And that is what brings us to the present day in American politics.

Democracy is infuriating. It comes from the Greek demos, meaning “people,” and cracy, meaning “are stupid assholes.” But you have to roll with it—not because it produces good results, but because to do otherwise is to be swept up in the thing you hate. You cannot beat the people. There are so many of them that they render you and all your opinions negligible. The only consolation is knowing that the same thing is happening to everyone else.