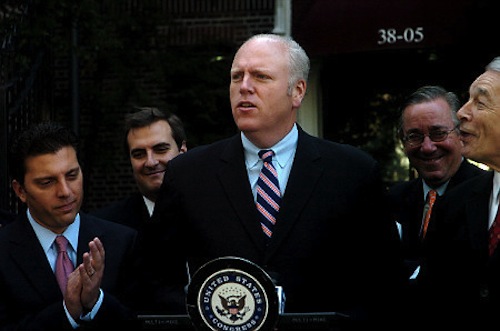 Those of you who can still bear to watch the sausage being made will be disappointed/heartened to know that the Office of Congressional Ethics is investigating eight members of Congress who accepted large donations from financial services companies while debating the financial regulatory bill. Suspect #1 is New York Democrat and Ways and Means Committee member Joseph Crowley. According to the Times, Crowley “left the Capitol during the House debate to attend a fund-raising event for him hosted by a lobbyist at her nearby Capitol Hill town house that featured financial firms, along with other donors.” Don’t worry, though. Once Crowley had finished accepting checks, he made it back in time to vote against several amendments that would have tightened restrictions on Wall Street. And he’ll probably maintain stellar attendance this week, as he and his colleagues discuss extending Bush’s tax cuts for the rich.

The confluence of these two stories marks an X on the rotten spot in American government. It’s worth noting that Crowley and his fellow ethics investigation targets—including Tom Price (R–GA,) who scheduled a “financial services luncheon” during the same debate and personally raised $23,000 from Wall Street firms in the two-month period surrounding the vote—aren’t accused of doing anything illegal. Congressmen accept contributions from the people they’re supposed to be regulating all the time, and half the story of the OCE investigation is allegations of overreach.

“There are things going to the floor every day,” Rep. Melvin Watt (D–NC) told the Times. “If this is going to be the rule, you can never do fund-raising.” Watt is himself a subject of the investigation, and the “this” to which he refers is the policy that elected representatives not accept donations in the same weeks that they vote on laws pertaining to the donors. That seems like a sensible rule, until you consider that the OCE is only really asking congressmen to wait a little before acting on bribes.

No one is asking Melvin Watt to turn down the money that Wall Street gave him while he was voting on how to regulate Wall Street. They just wish he had gotten it further in advance. In railing against “the appearance that donors will receive or are entitled to either special treatment or special access”—that’s from the 2004 House Ethics Committee letter admonishing Jim DeMint—the Congressional ethicists have made it clear that their problem with such naked corruption is not the corruption but the nudity. If Crowley and Watt had a little more respect for American democracy, they would only accept cash for votes during even-numbered years.

But a little friction tends to rub through the veneer. The Bush tax cuts—including cuts in the capital gains and estate taxes, plus an income tax reduction for households making more than $250,000—are scheduled to expire this year. Both Democrats and Republicans want to extend the cuts for families who make less than a quarter million, but only the GOP is insisting on preserving the upper-income break, plus the capital gains and estate cuts that will, if extended, cost the federal government $55 billion next year.

To put that number in perspective, recall that our same Republican congressmen filibustered last month’s unemployment benefits extension on the grounds that it would cost $35 billion. They’ve also made it clear that they’re willing to let all the Bush tax cuts expire if they’re not allowed to keep the upper end. “If we have to create a crisis to get people to come to the table and look at this tax code and start doing something about it, then I am for the crisis,” Sen. George Voinovich (R–OH) told the Washington Post. It’s an odd argument from a man who simultaneously defended the high-income breaks by saying it was suicide to raise taxes during a recession.

The Republican congressional caucus has made its priorities clear: $35 billion is too much to spend on the unemployed, but $55 billion for the 2% of Americans who made more than $250,000 last year is absolutely necessary—so much so that it’s worth obstructing a tax cut for the other 98%. Here is a position that cannot be defended on any ideological grounds—not fiscal austerity, not Constitutional literalism, not any commitment but to those best able to fund reelection campaigns.

All of this is legal and, pending the results of an OCE investigation, ethical. We have authorized our elected representatives to accept virtually unlimited amounts of money from corporations and the men who own them, and we expect them to govern on our behalf. Why? When considering the interests of two groups of people, one of which regularly gives him thousands of dollars and one of which does not, why would your congressman choose you? The answer, of course, is moral decency. Congress happens to have conducted several referenda on moral decency in the last few weeks, and the results are not encouraging.