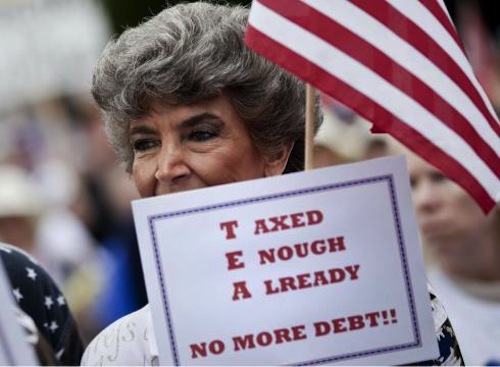 An American patriot finally has the common sense to demand no more taxes and no more debt.

I don’t want to alarm you, but this is probably going to be the last weekend in America. Congress has until Tuesday to raise the debt ceiling, and to paraphrase the Magic 8-Ball, outlook not good. It is possible that ours will become the first generation in history to cause a US federal default, not by calamity or foreign depredation but by our respective insistences that we are right about everything. The Republican Party, having thus far produced a proposal guaranteed not to win any Democratic votes, has doubled down on partisanship by adding a balanced budget amendment. Harry Reid has announced that such a bill is dead on arrival in the Senate, even as he reminds us how important it is to pass something. With default 96 hours away, each party is working tirelessly to assure the American people that disaster is the other party’s fault. Being an American citizen on July 29, 2011 is like riding in the back seat of a car driven by a bickering couple, one of whom refuses to open his eyes and the other of whom won’t give directions.

Don’t worry, though—Grandpa is back here with us, and he cannot believe what assholes the driver’s side is being. On Wednesday, Senator John McCain lambasted the House’s Tea Party delegation, calling them “hobbits” for their insistence on a balanced budget amendment as some sort of magical cure for the nation’s problems. It turns out he was reading from the editorial page of the Wall Street Journal, which suggests that the crisis of leadership in the Republican Party runs deeper than he thinks. McCain argued that Tea Party reps’ refusal to support Boehner’s plan would only strengthen the President, “making entitlements that much harder to reform.” Mark Meckler of the Tea Party Patriots issued a clever rejoinder on CNN: “Clearly he’s been corrupted by the ring of power.” Zing! Take that, you Washington insider. Once we get rid of all those multi-decade senators, the Chinese will surely forgive us our 14 trillion dollars.

Recognizing that Boehner’s attempts to win House support for a plan that the Senate had rejected in advance was forcing him into too many compromises, other Tea Party leaders called for the Speaker’s immediate replacement. High-functioning mongoloid Judson Phillips demanded a Tea Party Speaker of the House, and Jenny Beth Martin of the Tea Party Patriots concurred, suggesting that “maybe we should see about a different Speaker right away.” Once again, common sense leads the way: the best chance at gettting a debt ceiling deal by Tuesday is to real quick elect a new Speaker of the House who has the support of, you know, 10% of that body. Meanwhile, Mark Meckler reappeared to say that the possibility of federal default was a “myth that has been pretty much debunked.” You know—just like evolution and global warming and the Fourteenth Amendment.

That’s the one about everyone who was born here being a natural citizen. It also includes an assertion that the validity of US federal debts shall not be questioned, originally designed to force southern congressmen to pay for the Civil War and now put forth as a way to let Obama ignore the debt ceiling. It’s a tenuous argument that Michele Bachmann understands not at all, as evinced by her comments on CNN Wednesday:

One more time, Tea Party: the debt ceiling is not a tax. Debt and taxes are not the same thing. In fact, back when many US politicians considered leadership a species of opportunity, taxes were regarded as a cure for debt. But that’s all Washington mumbo jumbo. Ask any real American, and he’ll tell you that the debt has to be eliminated and taxes have to come down. It’s just common sense.

That sort of confidence in your own opinion can only come from two sources: being totally rich or having a huge wang. Unfortunately, the two appear to be mutually exclusive, as this bizarre study in macroeconomics suggests. Tatu Westling of the University of Helsinki has discovered that countries with shorter average penis lengths experienced more rapid growth in GDP between 1960 and 1985, presumably so they could afford Corvettes. Westling admits that he did not take his own observations seriously until he saw the inordinately strong correlation. “But seriousness,” he says, “does not imply that I believe in causality at this point.” He also managed to work the phrase “private sector” into his write-up maybe a few more times than he had to.

It’s so unfair—why can’t we have robust economic growth and big dicks, low taxes and no debt, a hard-line House Speaker and bipartisan agreement, recognition for our gay-curing clinics and immunity to questions about them? That last item was submitted by perennial cake haver/eater Michele Bachmann, who—after applying the phrase “job creator” to herself 450 times in the last month—believes that the business she runs with her husband should be off-limits to the media. Props to Ben al-Fowlkes for the video:

I hope that this country does not get so broke and stupid that she becomes President of it. Now if you’ll excuse me, I have to convert all my cash to gold and bullets.