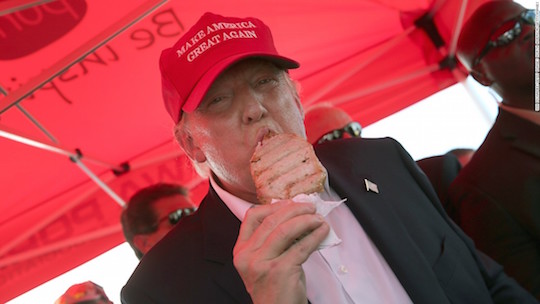 A big, pink, under-grilled slab of meat eats a pork chop at the fairgrounds.

Donald Trump was in Iowa this weekend, enriching the soil of my ancestral homeland with speeches at Urbandale High School and the state fairgrounds. His remarks at the Iowa Faith and Freedom Forum included a reference to a kerfuffle last Thursday, when one of his supporters declared President Obama a Muslim not born in America and Trump did not correct him. It eerily resembled one of the most dignified moments of John McCain’s career, except for the dignity part. “Remember the famous day when John McCain just ripped that microphone out of the woman’s hands?” Trump told the Faith and Freedom Forum, arguing he handled the scenario much better. “Does anybody really think that’s harsh?” The crowd applauded. Grim assessment after the jump.

END_OF_DOCUMENT_TOKEN_TO_BE_REPLACED

Rush Limbaugh threatens to crush the local orphanage like a pastrami sandwich in which the pastrami is just right, a little fatty but trimmed, with a hot mustard and no mayonnaise, dammit.

One of the most disappointing aspects of adulthood is the shortage of real villains. As a child conditioned by Thundercats and Bubble Tape commercials, I believed that adulthood would be cleanly divided into kind, decent people and cackling devils. Imagine my disappointment. For the most part, maniacal and cruel are in short supply in the actual world, vastly outnumbered by such boring traits as inconsiderate and selfish. Genuine evil is hard to come by. That said, ordinary humans can still reach cartoonish heights of dicketry if they really put their minds to it. Today is Friday, and our link roundup is chockablock with schmucks who suck, along with a brief burst of late-stage heroism. Won’t you stroke a white cat with me?

END_OF_DOCUMENT_TOKEN_TO_BE_REPLACED

One of my many unfalsifiable theories is that over the last fifty years, American culture has become more belligerent. Obviously we are less violent than our Founders, who at the highest levels of government continued to murder one another for sport. America 2012 kills way fewer people than previous Americas. Yet one also suspects that in 1804, people did not walk around like this:

Ours is a come-at-me-bro society. We’re not starting fights, per se, but we are fully prepared to fight and wearing a shirt with skulls on it. Each of us is actually kind of a badass. Movies and most children’s books have taught us that it doesn’t matter what other people think, and that leaves us free for rad behavior. This week’s link roundup is full of rad behavior, of both the coming-at-bros and getting-mounted-and-repeatedly-struck-in-the-temple-by-bros varieties. Get ready to watch Meghan McCain use words on television after the jump.