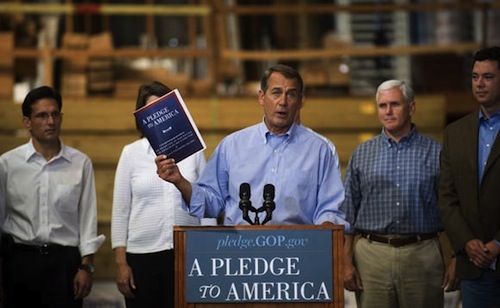 Seen here obscuring the face of the only woman involved

Last week, the Republican Party released the full text of its Pledge to America, a document that explains the GOP’s plan for fixing what’s wrong with this country—most of which rhymes with “the hawk’s pajamas,” if you get their meaning. The content of the Pledge is not exactly a thunderbolt. It advocates the same policies that Republicans have been pushing for the last two to 74 years, as well as certain politically unlikely plans, such as eliminating the Environmental Protection Agency, that qualify less as a promise than a threat. The Republican Party’s pledge to America is that they will lower taxes and deregulate industry, plus repeal health care. While the notion of an America in which each session of Congress devotes itself to undoing the legislation passed by the previous session is exciting, most the Pledge itself is unremarkable. What is remarkable is its introduction—500 words of hyperbolic nationalism that are the subject of today’s Close Reading.

The auspiciously named Preamble to the Pledge to America attempts to capitalize on the mania for all things Revolutionary that has swept the GOP along with the Tea Party. For the most part, it’s successful, deploying civics-class phrases like “consent of the governed” and “unalienable rights” to evoke the stern defiance of the Founding Fathers. It even does a pretty good job of aping their sentence structure, as in the decidedly un-Boehnerian, “Whenever the agenda of government becomes destructive of these ends, it is the right of the people to institute a new governing agenda and set a different course.”

From the party that brought you “Drill, baby, drill!” such syntax seems almost Biblical. The Revolutionary Style introduces some problems, though, as this passage suggests:

America is an idea—an idea that free people can govern themselves, that government’s powers are derived from the consent of the governed, that each of us is endowed by their Creator with the unalienable rights to life, liberty, and the pursuit of happiness. America is the belief that any man or woman can—given economic, political, and religious liberty—advance themselves, their families, and the common good.

The grammatically correct construction would be “endowed by his Creator with unalienable” et cetera. Understandably, the Republican Party wants to avoid using the masculine pronoun to refer to everybody, but “his or her” would A) read clumsily and B) briefly remind us of the demon Political Correctness. One solution would be to say, “endowed by our Creator,” but that sounds too nakedly Christianist even for the GOP. As a result, the each belongs to us, but the Creator—capitalized for reasons that are unclear unless you’ve heard any Republican politician say anything in the last 30 years—belongs to them.

The GOP didn’t write this thing to please Strunk and White, though. They wrote it to stoke your belief that a national health insurance mandate makes you the victim of colonial-style tyranny. Americans “yearn to be free and have the ability and the dignity to determine their own destiny [sic].” The sentence structure leaves it open as to whether we A) yearn and have the ability to determine or B) yearn to be free and yearn to have the ability, depending on how far you are into your own personal Don’t Tread On Me fantasy.

And why all this yearning? It’s probably because representative government pretty much ended last year:

In a self-governing society, the only bulwark against the power of the state is the consent of the governed, and regarding the policies of the current government, the governed do not consent. An unchecked executive, a compliant legislature, and an overreaching judiciary have combined to thwart the will of the people and overturn their votes and their values, striking down longstanding laws and institutions and scorning the deepest beliefs of the American people. An arrogant and out-of-touch government of self-appointed elites makes decisions, issues mandates, and enacts laws without accepting or requesting the input of the many

Now we’re into Glenn Beck territory. Despite winning the Presidency and control of Congress by some of the largest electoral margins in decades, the Democrats are “self-appointed elites” who overturn votes, “issue mandates”—there’s that health care word, for you policy aficionados—and “thwart the will of the people.” We subject Americans are left to watch in mute horror, possibly clutching babies, while our despotic masters conduct the federal government “without accepting or requesting the input of the many.”

If “the input of the many” sounds like a less grand phrase, it’s probably because the argument has just run up against a problem that only vagueness can solve. Exactly how our duly-elected President and congressmen have come to rule for the last year and a half without the consent of the governed goes unexplained, as does exactly which of the people’s votes have been ignored. If all you knew of recent events in the United States were this document, you’d think that the Obama administration had suspended elections so we could all work an extra day in the cane fields, not passed a law regulating credit card fees.

Here lies the problem of the Preamble: it’s terrific as a work of rhetoric, but its occasion is not adequate to its cause. The object of this declaration is no less than the delegitimization of the entire US government, and its purpose is, almost comically, to win a midterm Congressional election. In that light, the accusation that the Obama administration is creating a “polarizing political environment” and “blurring our sense of national purpose” becomes bitterly ironic. Perhaps the GOP really does regard the current majority as tyrants and themselves as revolutionaries. Perhaps, though, they simply regard words as a tool, and government by the people a manner of speaking.