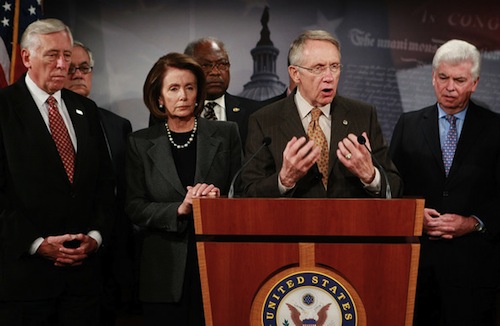 "Then, after taking some time off to travel with our families, we all become lobbyists..."

On Tuesday, as part of their Hold Absolutely Still And Hope Nothing Bad Happens strategy, Senate Democrats declined to vote on the defense appropriations bill that would have repealed Don’t Ask Don’t Tell. Yesterday, Harry Reid kept the ball rolling by announcing that Congress would not seek a vote on extending the Bush tax cuts until after the November elections. That way, Republicans can make good on their threat to filibuster any tax relief package that doesn’t include cuts for the wealthiest 2% of Americans without hurting their chances in the midterms. The Majority Leader’s confidence that whatever Democrats do, the electorate won’t like it is inspiring, but it’s just one instance of the can’t-do spirit sweeping America. In preparation for a weekend sure to be characterized by questionable decision-making, today’s Link Roundup presents four things even dumber than Harry Reid’s political strategy.

Lest you think I can’t pull it off, let me remind you: I’m from Des Moines. That’s the home of Drake University, who earlier this month unveiled their new branding strategy, entitled “D+.” See, “Drake” begins with a “D,” and obviously we want to associate the university with something good, and “plus” means “more,” as anyone who has read 1984 will tell you. So, you know, come get a D+ education! In a letter to faculty and students, Drake described the new campaign as “edgy and intriguing.” It certainly asks a lot of questions, not the least of which is, what is it like to be in a PR strategy meeting at Drake University? When an enormous D+ appeared on the overhead projector, did everyone have to pretend it wasn’t ridiculous? This is why it has to be okay to make fun of people in a professional environment.

Sometimes it’s just easier to let people have their bad ideas. In its ongoing, Borgesian effort to write a story about everything before it goes out of business, the Times has published this stunning trend piece about how many crimes in New York are committed by people wearing Yankees caps. Years from now, when President Boehner has replaced the public schools with Bible study groups and you have to teach your children how to analyze experimental data at home, remember this article. The first theory presented to explain the phenomenon is what one criminologist calls “The Jay-Z Effect,” which can be succinctly stated as “Jay-Z often wears a Yankees cap.” Five hundred words in, another possible explanation comes to light: the Yankees sell more merchandise than any other baseball team. They are also located in New York City. Coincidentally, the Irkutsk Plain Dealer, struggling with competition from web-based news outlets, has released a report on the connection between blubber theft and people wearing Irkutsk Walrusmen caps.

Okay, that was a stretch. Unlike this article from The Onion reporting that 1 in 5 Americans believe Obama is a cactus, they can’t all be gems. It turns out that satire remains the best response to ignorance, since it reminds us that widespread stupidity at least yields a significant fun dividend. “We asked people of varying races, ages, and backgrounds the same question: ‘What is President Barack Obama?'” Pew spokeswoman Jodi Miller told reporters. “And a fifth of them responded, ‘A cactus.'” Now seems like a good time to advance my untenable theory, which is that “cactus” is the funniest word in the English language. No matter what, you have to say the first part loud and the second part quiet, and it has not one but two “k” sounds, and the ending makes it sound vaguely scientific or Roman. All funny.

Less funny, and also less easily explained, is this story about Sami Samir Hassoun, the Chicago man charged with attempting to use a weapon of mass destruction in Wrigleyville. Hassoun left what he thought was bomb in a garbage can outside a popular bar after a Dave Matthews Band*

concert last weekend, and was apprehended by the FBI immediately. Part of the reason they got him so quick was probably that they gave him the bomb in the first place, and it was not so much a bomb as a paint can filled with inert materials. For months, Hassoun had been unwittingly talking about his plans to overthrow Mayor Daley to federal agents, who also provided him with a camcorder to scout bombing locations and gave him money so he could quit his job and work on his plot full-time. Then they foiled his scheme. The question of what crime the FBI has prevented here, exactly, remains unanswered. So does the question of to what degree this whole operation constitutes entrapment, since by all reports Hassoun was not sufficiently task-oriented to put together a terrorist plot on his own. Until we hear from Combat! blog’s legal counsel, I’m going to say that if the FBI gives you a ride to where you commit the crime, it’s entrapment.