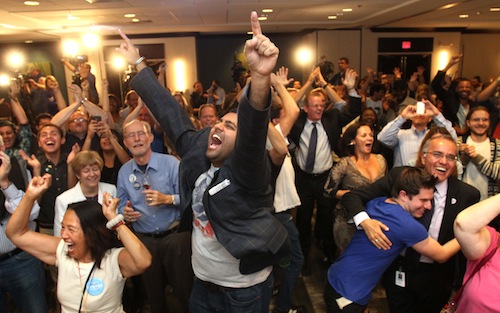 Jubilant Democrats briefly forget they are in Orlando.

So it turns out I was all worked up about nothing, you guys. Barack Obama has been re-elected president, and the balance of power in Congress has remained fundamentally the same. Democrats picked up a couple of seats in the senate, but not enough to achieve the 60-vote supermajority that has become the threshold for overcoming inevitable Republican filibusters. But are those filibusters still inevitable? The GOP spent four years stymying the president at every turn; they held the nation’s credit rating hostage and generally wrecked a two-century tradition of comity in American government, and it didn’t work. So will Obama’s second term be any different?

Mitch McConnell says no. The man who said his party’s number-one legislative priority was to prevent Obama’s reelection  remains unbowed in defeat. If anything, his plan is finally guaranteed success, but some of the suspense has gone out of it. One way or the other, Barack Obama will not be re-elected president in 2016. Joe Biden will have overdosed on whip-its by then, and the field will be wide open. Theoretically, congressional Republicans could improve their electoral prospects by spending the next four years sabotaging Democrats in general, but it’s tougher to smear a party than one man. Maybe they will find some reasons to play ball.

Maybe the Republican Party will learn something from the last two years. As individuals and as a group, they broke nearly every tacit rule in American politics, and they still lost. Mitt Romney changed lifelong positions to win the primary, then changed some more for the generals, and still he will not be president. Maybe this morning he is wondering whether he might have picked up Florida and Ohio if only he had remained pro-choice, or run on the strength of his health care reforms in Massachusetts rather than in spite of them.

Maybe the Michele Bachmanns and Todd Akins of the party are wondering how many center-right voters they drove to the other side, or at least impelled to stay home. More likely, the battered moderates of the Republican Party—the twenty-year guys, the Dick Lugar guys—are wondering what the Tea Party has done for the GOP, exactly, beside offer the American people a terrifying spectacle of dogmatism to kick off campaign season. Maybe, to the long-term strategists of the Republican Party, the calm blue eyes of Paul Ryan look a little less icy and a little more glazed this morning.

What I’m saying is that it’s possible we saw contemporary politics reach its nadir in the last few months, and now it has nowhere to go but up. The dream of a one-term Obama presidency is dashed. The dream of ideological consensus, dimly remembered when we woke sweating in 2010, has returned more vividly after last night’s hitting of the national snooze button. We get another four years, and a chance to reconsider the shameful political excesses of the last.

The election is done. Obama leaving office is a foregone conclusion, and there is no more reason to drive him out. Maybe we have learned little, but we at least amassed some concrete evidence that using the legislative branch solely as an instrument of election strategy does not work. We know that prying open the ideological gap between the parties does encourage people to jump across to your side. It’s possible we know that the basic assumptions of cooperation and mutual interest between Democrats and Republicans that have sustained American politics for the last hundred years are, you know, good.

Part of the reason I was so scared of this election is that politicking has taken such a despicable turn. It feels dirtier, and I don’t think many of us would disagree that it probably is. But in this instance, at least, the new shitty American politics did not work. Two billion dollars and hundreds of lies later, Congress and the White House look the same. Maybe America is a little smarter and a little better than the cynics thought, and maybe they learned something last night.