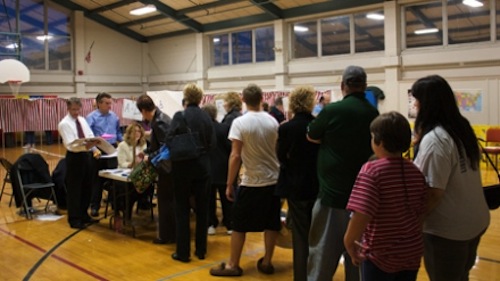 First of all, that kid is way too young to vote. Also he appears to have a karate rat tail, which should disqualify his mother. Sorry—I’m just gearing up for election day, which I will spend at my local polling place challenging suspicious-looking voters for the good of democracy. Judging by the number of “I voted” statuses scrolling Facebook this morning, an alarming number of my friends A) have jobs and B) already went to the polls. Probably I could have disqualified some of them, had I gotten out of the house early enough, but I am here typing so that I can bring you the very latest election results. For example, Dixville Notch was a tie.

Do not base your electoral predictions on the residents of Dixville. Such conjecture is best left to the professionals—who are called psephologists, as we learn from Andrew Sullivan. We also learn that some people get extremely angry when they encounter new words. Quote:

That is a person who reads Andrew Sullivan. Imagine how many hundreds of voters out there are casting their ballots today based on which candidate used a word they did not know and thereby made them insanely angry. In a nation of 300 million, chances are there are enough of such people to cancel out your vote and those of all your friends. The more you think about it, the more terrifying the prospect of strangers voting becomes. Perhaps that’s what inspired Jeff Greenfield to write this extremely dickish plea to undecided voters, asking them to stay home. Those people totally read your Yahoo! News column, Jeff Greenfield.

For a more sober analysis, consider Kevin Kruse’s claim that the real loser in this election has been the Truth. I personally was not aware the Truth was running, and even now I have misgivings stemming from its affair with Interpretation. But basically I am a Truth supporter, which means I will be voting against Mitt Romney. Let us not forget the words of his poll analyst Neil Newhouse, who declared that “we’re not going to let our campaign be dictated by fact checkers.” On an unrelated note, here’s candidate Romney talking about his religion on WHO radio:

If you somehow remain undecided and are reading this, consider whether you wish to vote for or against the guy who immediately agrees that the second coming of Christ will occur in Jerusalem—just says “it is” without a moment’s thought, one hundred percent certain about that second coming of Christ thing. Props to Ben al-Fowlkes for the link, and for his vigilant crusade against Mormonism in all its insidious forms.

You know who else remains vigilant? Lemmy. I’m pretty sure he is not allowed to vote, though, since he is A) a British citizen and B) drunk. Also, the quality of writing at UtlimateClassicRock.com is maybe not stellar. Billy Dukes’s report on Lemmy’s political views ends with these exciting sentences:

Fan excited about the band’s new music reported to be released in 2013 will be excited to hear they’re returning to the studio this winter. It’s there they’ll write new songs to finish the new project.

Ah, the Möbius School of clause relations. Meanwhile, at the other end of the quality spectrum: