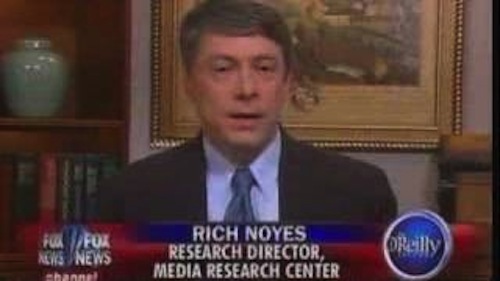 If you’re wondering what sort of reasoning Noyes and his Media Research Center employ—for example, if you are a time traveler who does not remember the Fox News unit from your Chinese high school history class—scroll on down to item #5, “Burying the Bad Economy.” Quote:

According to a study conducted that year by the Center for Media and Public Affairs, from January through September of 1992, the networks ran a whopping 1,289 stories on the economy, 88% of which painted it in a dismal, negative light. That fall, the unemployment rate was 7.6%, lower than today’s 7.9%, and economic growth in the third quarter was 2.7%, better than today’s 2.0%.

Noyes goes on to not tell us how many stories about the economy the networks ran this year. I’m going to guess it was numerically more—particularly if you include stories on the 24-hour cable news channels that have supplanted many of the functions network news performed 20 years ago. But now we’re ignoring Noyes’s intent. He’s not developing his position from evidence; if he were, he probably would have flinched at the contention in his fact-checking section that “Romney’s team was, at worst, guilty of highlighting those facts that best illustrated their points.” He’s developing evidence from his position, known around here as Just Sayin’ Stuff.

If Noyes were interested in observing first and explaining second, he might consider how the nation’s changing demographics have affected Republican fortunes. It’s possible that Mitt Romney’s poor showing Tuesday night owed something to his promises to make abortion illegal, crack down on immigrants and enforce traditional values from the Oval Office. The voters of the future might be less excited about the GOP’s promise of a speedy return to the past. As former George W. Bush strategist Mark McKinnon put it:

This election proved that trying to expand a shrinking base ain’t going to cut it. It’s time to put some compassion back in conservatism. The party needs more tolerance, more diversity and a deeper appreciation for the concerns of the middle class.

The difference between Mark McKinnon and Rich Noyes is that one of them is in the business of winning elections, and the other is in the business of going on TV and making his party feel better. The people who watch Fox News already align with Noyes politically. They tune in to people like Bill O’Reilly and, god rest his career, Glenn Beck not to figure out what to do, but to learn reasons why what they’re doing is right.

That is a problem for the GOP, because the Noyeses and the O’Reillys and the Palins are a far more developed wing of the party than the Roves and McKinnons. It’s hard to deny that Republicans are absolutely killing the media game. Their propaganda outlet is the most-watched cable news network, for Pete’s sake. After Tuesday, though, it’s equally hard to deny that Democrats are winning the election game. One of these parties in generating ways they can win the next election, and the other is coming up with reasons they should have won the last one.

Consider, in the cold light of retrospect, just how insanely conservative the Republican primary candidates were. Remember their first debate, when they went across the panel and all said they would not accept a 10-to-1 ration of spending cuts to tax increases. At the time, it was an exciting contest of conservative orthodoxy among people who were certain that conservatism was correct. Now that the least conservative among them tacked right and lost to a centrist Democrat, it seems like an absurd miscalculation of the American attitude.

It’s the kind of mistake you make when you hand the party over to people like Noyes. People who formulate conclusions first and then look for reasons might produce good rhetoric, but they come up with bad strategies. The American electorate is a vast, lumbering dinosaur. Who knows what’s going on in its various brains? All that can be said for certain is that it’s no good to lie flat in its footprint, talking about where it should have stepped as the limestone solidifies around you.