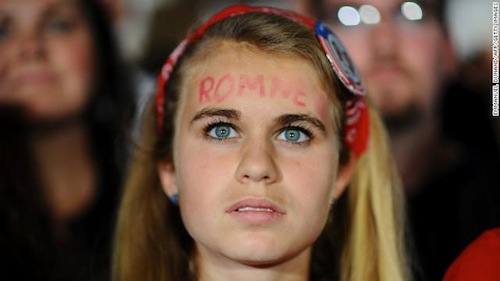 Campaign season is over, and truth can assert itself relentlessly once again. Not on TV or in conversation, of course—those are neighborhoods from which truth is long since gentrified out. But in the cold world of numbers and events and things that exist whether we believe in them or not, the discipline of the machine is once more imposed. Say what you will about what’s going to happen in the future—that stuff or some different stuff will happen. Today is Friday, and actuality is a cold splash. Whether it’s refreshing or chilling depends on how heated-up you got yourself in the last few months. Won’t you wash yourself clean with me?

By now you have probably heard that our boy Nate Silver accurately predicted the presidential election outcomes in all 50 states. His eerie prescience—achieved by ignoring “momentum” and all other manner of conventional wisdom—has led to perhaps my favorite internet meme of the year, DrunkNateSilver. I have decided that what I like in a meme is the gently surreal, and #drunknatesilver has it in spades. For example:

And the statisticians shall lead them. Meanwhile, among the many, many people who relentlessly criticized Silver for perceived ideological bias, Dean Chambers has admitted he was wrong. You might remember Chambers from his unskewed polls site, in which he corrected national polls that he felt oversampled Democratic voters. It seems he accounted for every possibility but one: there actually are more Democrats out there than Republicans. Quote:

Most of the polls I ‘unskewed’ were based on samples that generally included about five or six or seven percent more Democrats than Republicans, and I doubted and questioned the results of those polls, and then ‘unskewed’ them based on my belief that a nearly equal percentage of Democrats and Republicans would turn out in the actual election this year. I was wrong on that assumption, and those who predicted a turnout model of five or six percent in favor of Democrats were right.

It’s almost as if Dean Chambers was operating on incomplete or even inaccurate information—information that assured him even hard numbers contradicting his worldview had to be false. Over at the Atlantic, Conor Friedersdorf considers the contemporary right’s “self-imposed information disadvantage.” It turns out that having a Fox News doesn’t just make you a titan of persuasion at work; it also fills up your head with a bunch of unreliable quote-unquote facts. If future America learns any lesson from this period in our political history, I hope it is that not knowing the truth puts you at a real, functional disadvantage. Journalism is not just a way to win elections.

And now for schadenfreude. Nate “Schweberfreude” Schweber sent me the link to my guiltiest pleasure of the week, White People Mourning Romney. It’s where I got the beautiful image a the top of today’s post, and also where you can see this: 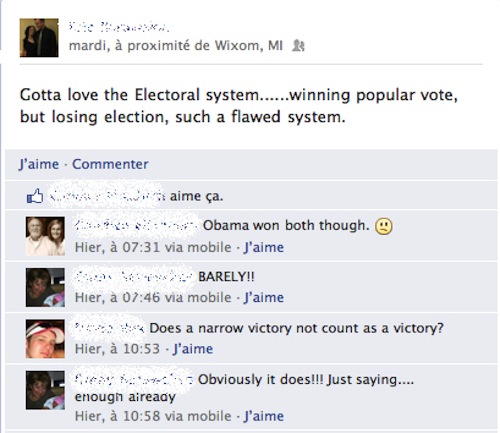 I submit that this screen capture embodies the fundamental mendacity of contemporary discourse. You start with a lie; when someone points out that what you said is not factually accurate, you insist that it was basically true, and when pressed you say fine, but the idea your lie supported is right anyway. Also, where was all this outrage over the electoral college before Romney lost? Oh right—it was in the year 2000.

I’ve said it before, and I’ll say it again: you simply cannot trust white people. The only place to get truth these days is on hip hop albums—ideally ones whose covers feature the same car I drove in 2005. Aaron Galbraith will recognize the sample on this one. Do you?