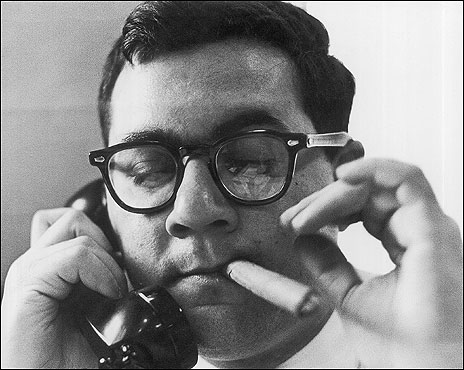 Does he look like a man who got here by indulging rednecks?

By now you’ve probably seen the video of Representative Barney Frank (D-Mass.) putting the rhetorical whompus on one of his constituents at a town hall meeting in Dartmouth. If you somehow haven’t, do yourself a favor. The question—put to him by the most adorable hate-filled populist ever— was “Why do you continue to support a Nazi policy, as Obama has expressly supported this policy, why are you supporting it?” It’s an elegant rhetorical trap, but Frank finds a way out of it. First, he points out that the questioner is currently holding a photograph of the President with a Hitler mustache drawn on it. Then he asks her what planet she spends most of her time on, and concludes that “Trying to have a conversation with you would be like trying to argue with a dining room table. I have no interest in it.”  As they say in Boston: face! Somewhere, Cicero is smiling.*

What’s surprising about Frank’s remarks is not so much their vehemence but that they were so long in coming. For weeks now, legislators from Arlen “The” Specter to John “The” Boehner have listened to questions about death panels and Nazism as if they had something to do with the subject at hand. They don’t. Health care reform is arguably the most complex policy problem of the decade, yet when the pathologically ignorant repeatedly interrupt public forums with objections to provisions that are not, you know, actually in the bill, they are treated as if they were participating in the democratic process. They aren’t. They are like children who won’t sleep because there’s a monster in the closet, and instead of telling them to just go to bed our elected representatives are nodding seriously and reiterating their vigorous anti-monster stance.

As anyone who has taken pedagogy can tell you, children need to shut up, and on Tuesday Barney Frank treated his questioner as what she was. If you’re wondering why more congressmen don’t do that, have a look at coverage of the event on Fox News.

Besides the obvious editing, which makes Frank appear to be responding to no questions at all, I would draw your attention to the introduction of this video. We open with a shot of the Democratic** Party Chairman trying to eject a woman, followed by Frank calling him back to the podium and announcing, “I’ve asked the chairman to ignore the disruptions,”—that is, stop trying to eject people. Then Griff Jenkins explains the clip by saying, “And that chairman trying to offer both sides to be heard.” Of course, it’s Frank “offering both sides to be heard,” and it’s Fox promising us “a sampling of some of the questions we heard from the audience tonight” only to show us decontextualized clips of Frank yelling at people. That sort of manipulation is to be expected, though, and it’s no more troubling than their coverage of anything else. It doesn’t bother me that Fox is presenting one side of the health care debate. It bothers me that the news media and our elected representatives continue to treat it as a “side” at all.

There is no discussion, at any level of government or in any serious policy debate, of euthanasia or rationing or care review panels or anything. No one wants that stuff. The people protesting against it might as well oppose being mean to puppies. To argue against such measures is to erect a straw man, and anyone who has taken high school rhetoric knows that is an unacceptable way to argue. It’s dishonest—unless you actually believe in the straw man you have put forth, in which case you’re just stupid. I am going to say this once, as clearly as I can: the patently useless opinions of the stupid should be excluded from political debate. We’re not talking about whether to go to the new Vin Diesel movie, here. We’re talking about whether to implement government-subsidized health care at the national level—an issue that could, among other things, bankrupt the federal government or prevent sick people from dying. We cannot afford to screw this up in the name of making dumb people feel important.

Barney Frank read H.R. 3200, so he knows there’s no gradual transition to Nazism in there. Presumably, the other members of Congress have read it, too, or at least had it explained to them. They don’t get their information from chain emails, so why do they pretend to regard as equals those who do? The national media keeps describing the town hall protests as a “populist groundswell,” and they keep leaving off the phrase “of stupidity.” They are terrified of being perceived as elitists, despite the fact that they run multi-billion dollar communication organizations and devote their entire lives to understanding politics and policy. Our senators and representatives kowtow to the same imaginary folk wisdom, despite being chosen from millions of people to determine the laws of the most powerful nation on earth. But dammit—we elected these people because they know politics better than us. At the very least, most of them have law degrees. Yet they are afraid, when confronted with a stupidity so vast and brave that it cannot identify the terms of the argument, to stand up for their own expertise.

They’re making a mistake. As Vonnegut said, the problem with stupid assholes is that they’re so dumb they don’t believe there’s such a thing as being smart. Arlen Specter and the rest of the legislators calmly listening to talk of Nazis and death panels should remind us that there is such a thing as being smart. They should—dare I say it?—ignore the opinions of a large segment of the American electorate. That they are afraid to do so should tell us something about just how smart they think we are. Fox News is calling these protests a referendum on our elected officials, but they’ve got the terms reversed. That such protests are allowed to continue—that more congressmen don’t respond like Barney Frank—is our elected officials’ referendum on us.

** Notice how Fox always refers to it as the “Democrat Party?” Makes it sound less like a political position and more like a club, doesn’t it?