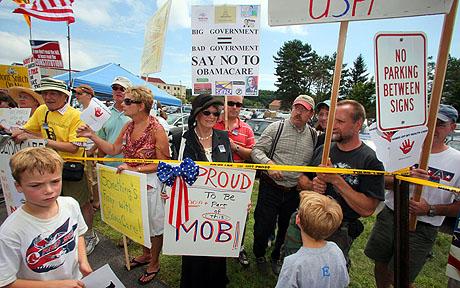 Members of the Pennsylvania Republican Committee are once again reminded not to wear strings of pearls when protesting the expansion of social services.

The Democrats’ proposed health care reform package lost ground again yesterday to the competing Stupid Assholes Package, and the New York Times is starting to get a little snippy. In a story that blurs—and by “blurs” I mean “carefully erases”—the line between commentary and news, David Stout observes that Town Hall meetings across the eastern seaboard reflected “deep-seated fears, a general suspicion of government and, in some cases, a lack of knowledge on the part of the questioners.” The article is full of such gems of understatement, further solidifying the Times’s role as the disapproving butler of American democracy.

After his Town Hall, Senator Arlen Specter remarked that “there’s more anger in America today than at any time that I can remember.” Probably Americans’ anger at Arlen Specter somewhat exceeds their overall anger median, but still—Arlen Specter is older than agriculture, and he remembers the integration of Little Rock High School. When he says Americans are angry, I believe him. Their anger, it should be noted, has taken the form of preventing other Americans from conversing with their congressional representatives. I don’t want to alarm anyone, but as near as I can tell the situation is as follows: a significant segment of the American population, which regards itself as extremely patriotic and—in some cases—under a mandate from God, and whose primary source of information is A) shadowy corporate lobbyists or B) talk radio or C) internet forwards, has developed “a general suspicion of government” and therefore taken it upon itself to stop local discussions of national political issues. There’s your populist revolution, folks. They’re here, they’re really angry and loud, and they don’t know anything about American government, but they’re against it.

On the plus side, most of them appear to be old. They’ll have Medicare, of course, but eventually death will quiet the Town Hall meetings for us. In the meantime, though, we’re looking at the post-industrial, reified democracy equivalent of Shays’s Rebellion. If you would like to have some hope of getting the same low-cost health care currently enjoyed by every other industrialized nation on Earth—or, for that matter, change the body of the laws governing the United States in any significant way ever again—you are going to have to contend with this people. Like zombies, their strength lies in numbers. Also like zombies, their weakness lies in not knowing stuff. To that end, here is a link to the full text of H.R. 3200, the so-called America’s Affordable Health Choices Act of 2009. If it’s going to pass, we’ll probably have to rename it the America Rules Tits and Motorcycles Patriot Act of the Year 10,000, but in the meantime we can directly refute the many, many false statements about it currently emanating from crazy old people and former vice-presidential candidates.

Note that Glenn Beck fans screeching the word “socialism” and crossing themselves will probably not listen to your direct citation of sections and subheadings from a piece of proposed congressional legislation. These people are not to be swayed. But the more people publicly demonstrate a knowledge of the actual bill and its actual implications—the more we participate actively in the democratic process—the more we prove the existence of a large, public counterweight to those who would try to derail it. The lesson Arlen Specter took from his last foray into his home state was that the American people are angry and misinformed. What incentive could he have to govern in a way that responds to what the people actually want? At least Aetna will give him campaign contributions if he does what’s good for them. The current political climate encourages government to disregard the will of the people, because the people appear to be erratic and dumb. If we allow some people to keep abusing representative democracy, representative democracy will have no use for any of us. Step up. Fight. Being stupid isn’t an excuse anymore. The stupid exhausted my pity when they decided to paralyze my government.