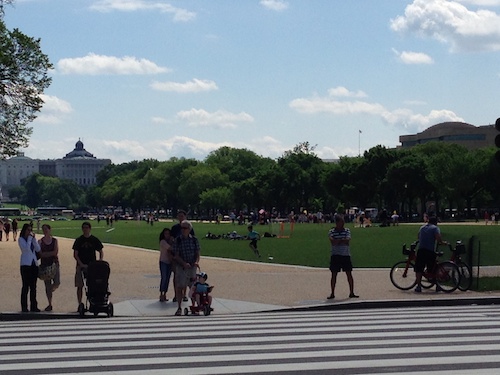 The National Mall, site of OAS, on Saturday courtesy of Jacek

It’s Monday, and the federal government appears to be functioning much as it did on Thursday. Either Operation American Spring has failed, or the mainstream media has predictably covered up the resignations of the President and congressional leaders from both parties, along with the repeal of virtually all federal taxes. My money is on the second one, because I am a self-deluding maniac. In retrospect, Col. Harry Riley’s prediction that “10 to 30 million” patriots would mass on the National Mall this weekend may have been unreasonable. But isn’t that what the Tea Party/constitutional patriot movement is all about?

Let us not forget, ever, that both FreedomWorks and Tea Party Nation endorsed Operation American Spring. Those groups may not command much respect among the politically powerful, but they are the founding organization of the Tea Party and one of its most coherent national groups, respectively. If you are looking for legitimacy in the Tea Party movement, they’re it. And yet they remain so far from legitimate—both in their rhetoric and in their ability to influence American politics. By logistical measures, the Tea Party is ineffectual. It might as well not exist.

And yet it feels so important. This sensation has died down since 2009, but news reporting and the behavior of congressional Republicans suggest that the Tea Party is still extremely important. I myself have called it “the most vital movement in contemporary politics,” although in my defense, I don’t know what I’m talking about. Still, I feel comfortable saying that there is a significant gap between how we think about the Tea Party and how important it actually is.

While I’m conjecturing, I submit that A) this gap is largest among Tea Party supporters themselves, and B) that kind of thinking is fundamental to their operation. Operation American Spring stands as compelling evidence for proposition (A). Bringing 10 million people to the Mall would make for the most significant public demonstration in US history. The 1963 March on Washington, for example, attracted 200,000. When the low end of your projected attendance is 50 times Martin Luther King’s greatest organizational achievement, you may have overestimated yourself.

Consider Col. Riley’s statement to Before It’s News, in which he explains why he encouraged OAS attendees to bring guns to their peaceful demonstration:

For more than five years, ‘we the people’ have been writing, calling, faxing Congress, the media, screaming in Town Halls, marching, rallying, demonstrating, petitioning, all to no avail. Every branch of government looks at ‘we the people,’ whom they have taken an oath to serve, as ‘pests,’ interfering with their political agenda, cramping their self-serving, greedy agendas. We have no faith in the ballot box any longer, as many believe this sacred secret box has been compromised.

First of all, I’ll compromise your sacred secret box, baby. Second, what The Colonel is describing here is his movement’s failure to influence a democratic system. Even though he told Congress what he wanted them to do, and even though he voted, he did not win.

It’s almost as if most Americans did not agree with him. But if you accept that proposition, you also have to feel guilty about, say, disrupting a town hall meeting re: health care reform so that no one can talk about anything but your ideas. Unless you maintain the premise that a vast majority of Americans believe what you believe, your revolutionary iconography—your guns, your tree-of-liberty rhetoric, your call for the overthrow of the US government—looks less like noble commitment to American democracy and more like bullying.

Like all bullies, Tea Partiers needs to tell themselves that everyone quietly admires them. The alternative is to see themselves for what they are: a group of people who declared American democracy illegitimate at the same moment it contradicted their desires. I don’t think the Tea Party is a conglomeration of liars, and it seems only plurality-assholes. I think it’s a bunch of people who don’t know America well enough to realize that not everyone thinks like they do. Ironically, that makes them like most of us—just with more confidence, and probably way too many guns.