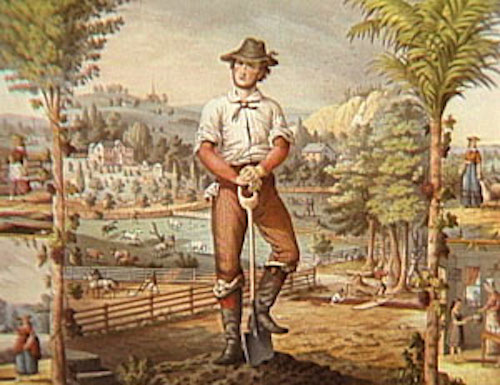 As a freelance writer, I pay a 15% tax on all my income for not having an employer. That rate covers what I would contribute to Social Security and Medicare if I had a regular job: 7.65% for my share and 7.65% for what would be my employer’s share. With a little searching, you should be able to find a pretty good tax estimator online that can simply this process.

Already our reason is affronted, since my employer does not exist. You could argue that I am my own boss and should therefore pay double, except the way in which I am least my own boss is that I do not pay myself. To ask me to pay a theoretical employer share of FICA taxes is like asking me to pay theoretical property taxes on the house I don’t own.

The condition of being self-employed, of not getting a W-2, is not the condition of employing one person who is me. It’s the condition of having no employer. To make me pay the employer share of taxes on contract wages reported on my 1099 forms is to ignore the fact that there is another, employer-like entity who pays me: my clients. These people literally employ me. But the self-employment tax shifts the burden of payroll taxes away from such people and onto workers, even though the money they pay us is tracked and documented just as well as regular wages.

Pretty much by definition, my clients have more money than me.*

The self-employment tax is therefore regressive; it falls more heavily on the poor and working than on the rich and hiring. It’s also blatantly rigged in favor of the kind of self-employed people who make enormous amounts of money, such as actors and their dentists.

Self-employment income is taxed at 15.3% up to $106,800. Any income in excess of that amount is not subject to the self-employment tax at all, so if I make a hundred grand writing next year, I will pay exactly as much in self-employment taxes as Cameron Diaz. Obviously, this is a hypothetical situation. Cameron Diaz won’t make any money next year, because she turned 40, but if I had somehow made $100,000 the year The Mask came out, her millions of actor dollars would not be subject to the same taxes as my tens of thousands of writer dollars.

This brings us to a larger question about the self-employment tax: what kind of work behavior do we want to incentivize? For the purposes of this discussion, I would like to point out that the contemporary model of middle-class work—individuals work for corporations and get a biweekly or monthly salary, which is roughly the same no matter how their work output varies from pay period to pay period—is relatively new.

Laboring for one employer in exchange for regular wages became the dominant mode of human work after the industrial revolution. Before that, most Americans worked for themselves as artisans and yeoman farmers.  We’re clearly glossing over some history, here, as plenty of Americans were poor laborers, domestics, women, slaves, et cetera. But the ideal of American work remains the self-sufficient homesteader or craftsperson, laboring to bring his own products and skills to market by his own effort and ingenuity.

I think that if you asked most politicians what American work should look like, that’s what they’d describe. The reality since World War II, however, is that most middle-class professionals work in offices for other people, and the tax code reflects that.

Now those jobs are less secure, and many of them are being replaced by 1099 consultants like me. American work is changing, and artisans and other skilled laborers are poised to live better working lives than we did 50 years ago. As a nation, we should look at our tax code and consider what kind of work we want to encourage.

We claim to support risk-taking and creativity, the entrepreneur who strikes out on his own to do better and more satisfying work than his competitors. The self-employment tax discourages that. It punishes us for not working for someone else, as if income instability and expensive health insurance were not punishment enough. The American dream says to seek independence, to take risks, to be your own boss. The US tax code says differently, and it should change.