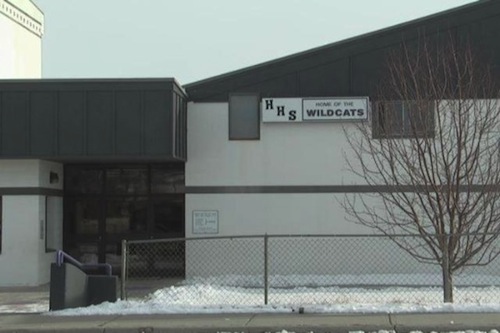 Harrison High School—who wouldn’t want to go there five days a week as required by law?

Last week, police arrested a 14 year-old student for bringing two handguns and 47 rounds of ammunition to Harrison High School in Montana. According to another student, the boy said he did so for political reasons; he wanted to prove that you didn’t need an assault rifle to shoot up a school. Later, in a detail that reminds you the person in question is 14 years old, prosecutors said that he decided to run away to the mountains and use the guns to hunt food. You actually do kind of need a rifle for that.

The boy’s name is not in any report, since he is a minor. In order to make him easier to write about, I’m going to call him Tom Sawyer. My original fake name, Miguel Almodovar, was discarded because it colored the story. Anyway, Tom Sawyer is not living in the mountains and drilling cougars with a .357 Magnum as planned. He is in custody for criminal endangerment. Whether he actually intended to prove a point about gun control by shooting a bunch of other kids with pistols is not clear.

That is a patently absurd idea, and it is one you immediately want to believe. As any reader of Family Circus knows, children hold a mirror up to society. One of them shooting several others to prove his position in the gun control debate is like when Jeffy says “pasghetti.” It’s ridiculous, but it also makes you think. Specifically, it makes me think that our discussion of gun control has become reified in such a state of hyperbolic absurdity as to lose any connection to what a sane society would want.

But that’s if you believe Tom Sawyer really intended to prove that you don’t need an assault rifle to shoot kids, as he told his classmate he did. You want to believe that our national discussion of gun control has become so hysterical that it taught a child to value one of its finer points more highly than human life, but then you remember that you are reading a news article in which one 14 year-old tells a reporter what another 14 year-old said.

If I remember 14 correctly, kids that age issue death threats every day. They are also do not document one another’s statements and behavior with 100% honesty. It’s possible that between these news reports’ necessary reliance on hearsay and the sterling vows of the high school freshman, some bullshit has crept in. Tom Sawyer is either the saddest, dumbest child in the world, or he wasn’t really going to do that.

He didn’t, after all, just like he didn’t move to the mountains. He showed the guns—which are empirically, undeniably cool—to some other kids and got busted. Thank god he is 14, so that he only has to spend the next four years looking back on it as the dumbest mistake of his life instead of, you know, forever. Also, thank god he did not kill several schoolchildren.

Here is where I might launch into an unfair argument that starts with “…but what if he did?” Age and probably awful home life notwithstanding, Tom Sawyer is a dumb kid. Besides his classmate’s timely snitching, nothing prevented him from using those guns he took from his father to kill a bunch of other kids for maybe the dumbest reason imaginable. It is terrifying to consider the consequences of one person’s poor judgment when he is given the ability to mortally wound others by moving his finger, and therein lies the awful power of the gun—in the hands of a child, a mentally ill person, or simply a guy with a bad temper.

Tom Sawyer did not shoot anybody with those guns, though. He didn’t even wave them around, and it is unfair to use what didn’t happen as evidence. Invested with the power to kill several of his classmates for whatever bonehead reason he thought compelling, he did not shoot anybody. Young Mr. Sawyer is proof that even a child can handle a gun responsibly.

Of course, we are also deluged with proof that many adults cannot. The stunning thing about this story is not Tom Sawyer’s warped sense of argumentation or how close he came to making an awful choice, but the fact that we ever gave him the opportunity. Don’t kill anybody, American law says. Now here’s a machine that makes it really easy to kill people. Only use it if you need to. Maybe there’s something beautiful in manufacturing and distributing weapons that can give anyone, even a child, power over life and death. Maybe that is a boldly free society. Or maybe it is just really, really, dumb.