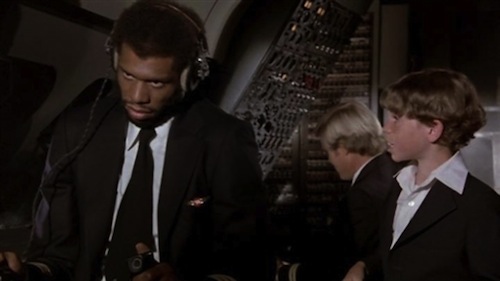 The single largest audience for HBO’s Girls is white men over 50. Fifty-six percent of the show’s audience is male. I got those fun facts from Kareem Abdul-Jabbar’s indictment of Girls in the Huffington Post, which he wrote because “win six NBA championships” was crossed off his to-do list. It is weird that Kareem composed a critical review of a TV show. What’s really weird, though, is that he makes a lot of very good points.

Some of them are obligatory, but even then he makes them with elan. Consider his first argument:

Skyhooked! This criticism is not exactly new; it’s borderline facile, but it lays the groundwork for Kareem’s larger point: Girls is “basically a standard sitcom” shot through the lens of Lena Dunham’s narcissism. Criticized in the press for not having any black characters? Fine—one of the girls has sex with a black guy. The single-episode boyfriend is a solution right out of Friends, adjusted for Dunham’s version, Selves. Here is a world where nearly all the characters are projections of the author’s sense of who she is; those who enter from the outside pay tribute to her and leave.

Perhaps that’s a little harsh, but like the 1969 Milwaukee Bucks, Kareem has got me fired up. For a series about four characters who are very self-conscious, neither Girls nor its creator ever achieves much insight. The show is a paradoxical combination of self-regard without self-discovery, which might explain why Dunham has been lauded as a voice of her generation by an audience that is 30 years older.

Definitely, Girls is about twentysomething girls in New York City. It appears to be about the experience of being a young person in that place, but if you ever actually were young in contemporary New York, Girls is infuriatingly, relentlessly stripped of the signal experiences.

For example: you moved to New York because books, movies and TV told you it was a great place to live a bohemian life of meaningful experience, but when you got there you had to work 50 hours a week to make rent in a desolate neighborhood. No one on Girls has a job; they just hang out in their Park Slope apartment. Also, you moved to New York to enact the uniquely beautiful personality you always knew you had, but when you got there the sheer number of other people meant that nobody gave a shit about you. Every character on Girls finds the girls fascinating.

By you I mean me, but you get my point, here. Because Girls is self-conscious without being self-aware, it produces a strange effect in its audience. If you’ve never been a youngish person in contemporary New York, it is thrillingly about that. If you have, Girls is maddeningly fake. It’s like being an astronaut and watching Lost In Space.

In other words, it is like watching a TV show. As Kareem points out, Girls is not a bad sitcom; it’s just not nearly as good as everyone insists it is. Compared to very good comedies like Seinfeld and My So-Called Life, it is like cake: enjoyable and well-executed enough, but without the substance of a full meal. The problem is that is presented as a seven-course feast, mostly by people who have not eaten at the restaurant.

So Lena Dunham is the voice of a generation of young white women, says another generation of old white men. It is weird and delightful that the person identifying this problem is an old black NBA center. In African-American studies—another mechanism by which white people listen to voices of other generations with no means of evaluating their authenticity—there is a theory that black people necessarily approach American culture from a standpoint of opposition. American (read: white) culture is something imposed on them; they participate in it, but they do so with the certainty that what they are being offered is not really truthful. Girls is a fascination for me, because it evokes that sensation of consuming culture oppositionally. I cannot tell you how glad I am that Kareem Abdul-Jabbar feels sort of the same way.