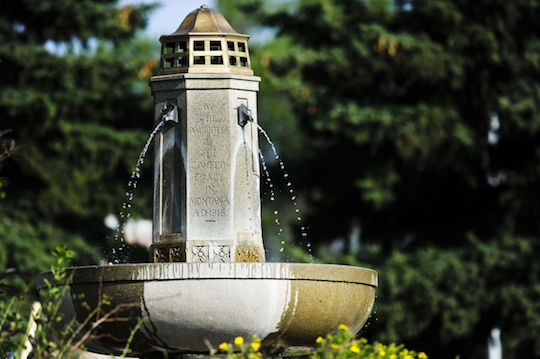 The Confederate Memorial Fountain in Helena—photo by Thom Bridge

The state of Montana did not participate in the US civil war. Montana didn’t become a state until decades later, in 1889, and even then it was about as far north of the Mason-Dixon line as states get. Although somebody in the Montana territory probably traveled south to fight on the side of the Confederacy, the war is only a part of this region’s history indirectly, in the same way as, say, the Boston Tea Party. There’s no statue of Sam Adams in Helena. Yet there is a memorial to Confederate soldiers, given to the city by The Daughters of the Confederacy in 1915.

In a letter to city commissioners, eight members of the state legislature’s American Indian Caucus recently asked that the fountain be removed. Helena Mayor Jim Smith opposes this idea. In his own letter, reported by Holly Michels1 in the Helena Independent-Record, he writes, “Fundamentally, I believe we ought to be very careful before we start obliterating history. That is what totalitarian regimes do.”

Let’s talk about what constitutes history, then. The notion that statues and fountains somehow stand between us and the “obliteration” of history is fatuous. I defy you to show me someone who only knows about the Civil War from a statue. And what information about history does the fountain in Hill Park convey? If you did not know anything about the past, all this monument would tell you is that there once existed a group called The Daughters of the Confederacy, and it dedicated a fountain in 1915.

That fountain is less a piece of history than a monument to one group’s understanding of it. The distinction is  important. The D of the C built this monument 50 years after the Civil War ended. That’s an astonishingly short time, like erecting a monument to the Wehrmacht in Paris in 1995. But it is still two generations after the Confederacy ceased to exist, and the fountain cannot meaningfully be called a relic of Civil War history. Instead, it is a monument to the City of Helena’s endorsement of the Daughters of the Confederacy in 1915.

That moment is also part of history, but it is not important in the same way as the Civil War. I don’t think anyone considers it a significant part of the story of Helena. It has purely symbolic importance, and what it symbolizes—then and now—is not something the city should support, even if only by inaction.

The Daughters of the Confederacy was founded to sponsor burials of Confederate veterans, erect monuments to them, and influence schools to teach Civil War history in ways that reflected favorably on the South. Its membership increased dramatically during the first two decades of the 20th century, going from 17,000 in 1900 to almost 100,000 by the outbreak of World War I. The fountain in Hill Park reflects the height of the Daughters’ influence. It also reflects a sympathy to their cause completely divorced from history.

Again, Montana played no part in the Civil War. If it had existed as a state, it would have almost certainly fought for the North. It had no historical ties to the Confederacy, in 1863 or in 1915. The fountain therefore suggests an affinity for some other aspect of the Daughters’ mission. It is hard to say what that could be other than white supremacy.

Many historians, including Princeton professor and Pulitzer Prize winner James McPherson, consider the Daughters of the Confederacy a stalking horse for white supremacy. It’s not inconceivable that some of the Daughters are lineal descendants of Confederates who only want to memorialize their ancestors, but that argument breaks down in Montana. The further we get, geographically and chronologically, from the Confederacy itself, the more structures like this fountain become monuments to the idea and not the history.

That idea is repugnant. Confederate soldiers fought a war of treason against the United States in defense of slavery. There are a lot of good reasons to study that war and remember it, to literally memorialize the history. But there are only two reasons to memorialize the ideas: either you like the notion of exploiting and disenfranchising black people by force, or you like the notion of betraying the United States and killing its citizens.

There is a third reason, of course: you recognize that Confederate monuments have some vague appeal to disgruntled white people, and you’re pandering. I hope that’s what Mayor Smith is up to. I would hate to think he is a slavemonger or seditionist. He has probably just performed the same calculus the city fathers did in 1915. Most of Helena is white, and saying yes to some cracker nonsense will alienate fewer voters than saying no. The next step in this process, probably, is to prove him wrong.