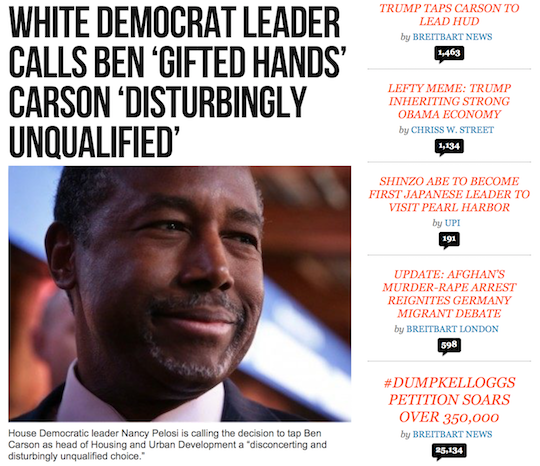 There’s a lot missing from this report, including what Carson’s qualifications might actually be. If you want those kinds of nuances, you’re better off with the Times. It’s kind of weird that Breitbart would just reprint a statement from the House Minority Leader with none of its own commentary or counterpoint, save that quote from Donald Trump.1 But all the commentary they need is in that homepage headline: White Democrat Leader Calls…

Fact check: Pelosi is white. And Carson probably is unqualified, given that he has never before worked in government or run a large bureaucracy. He is also black—as Trump reminds us, none too subtly, when he says that the retired neurosurgeon and former candidate is “part of ensuring that this is a presidency representing all Americans.” If you’re wondering how that project is going, here’s his economic team: 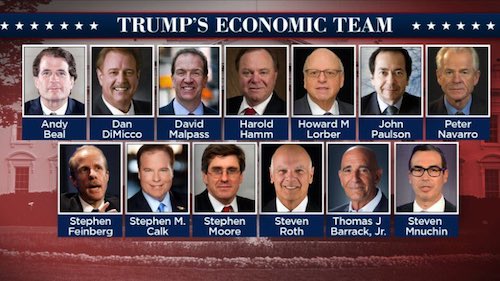 Now that’s good representation. He’s got white men both and without hair, a strong plurality of whom are named Steve. But I digress. The point is that Carson may not know anything about housing or urban development, but he is black. And if you make that the central element of his identity, “White Democrat Calls [Him] Disturbingly Unqualified” takes on unsettling overtones.

This headline operates by reducing people to simple identities. Carson isn’t unqualified; he’s black. Pelosi isn’t the House Minority Leader; she’s white. Once you frame the argument that way, specific criticism becomes an expression of historic prejudice. We all agree this prejudice is bad, so the issue boils down to a question of shared values. If I tell you a story that goes “white woman says black man is unqualified,” you know what’s happening and how to feel about it.

There are about twenty reasons why it’s intellectually dishonest for Breitbart to do that here, not the least of which is that bigotry is their stock in trade. Also, a news organization should add detail and nuance to a story, not reduce it to idiotic simplicity. And previous Breitbart headlines about people criticizing, for example, President Obama did not read “White Republican leader says…” But what’s most striking about Breitbart employing this kind of reduction is that it’s a rhetorical technique of the progressive left.

The shared value to which “White Democrat Leader Calls Ben…Carson ‘Disturbingly Unqualified'” appeals—prejudice is bad—is more consistently shared by the left. It may not yet have taken hold among the editors of the website that published WHO Report: Trannies 49 [Times] Higher HIV Rate. The people who alerted us that Black Lives Matter Organizer Posts Guide to Riotwear…In Arabic might not strenuously oppose white supremacy. Their willingness to take up the cudgel, in this case, shows how dangerously versatile this kind of essentialism can be.

No one is saying Carson is unqualified to run HUD because he’s black. But anyone can imply that’s what people are saying, simply by pointing out that whoever says it is white. “Anyone,” in this case, includes the overwhelmingly white assholes at Breitbart. They have identified a flaw in left discourse that lets intellectual dishonesty in, and they have adopted it, because for them intellectual dishonesty is a feature, not a bug.

The right does not hate “political correctness” because it can be twisted in absurd ways. They hate it because it argues for the rights of oppressed people. They hate the content. The architecture of thought, which at its worst can simplify individual lives to social and historic categories—that’s the part they like. That’s the paradigm that left discourse shares with old-school racism. In these bracing times, maybe that’s the part we should reconsider.