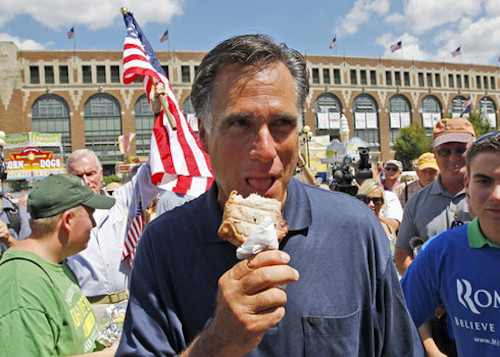 Mitt Romney eats a pork chop on a stick, using a napkin to protect his soft hands.

Like many private, vaguely creepy people, I live in fear that someone else will find me out. That worry is natural, but it’s also misplaced: we’re far more likely to expose ourselves than to be exposed by others. It all checks out from a phenomenological standpoint. Who we are is defined by what we do. If the world is going to find out who you are, is it really likely to happen because of what someone else does? Today is Friday, and you are bound to expose yourself sooner or later. Won’t you open the trench coat with me?

First, the good news: the Republican Governor’s Association has made a list of its corporate donors available to the public. The bad news is that they didn’t do it on purpose, although from where I sit I’m having a hard time determining how, exactly, that is bad. As a 501(c)(4) organization, the RGA doesn’t have to disclose who gives it money. A website coding error made all its donor documentation searchable for a brief time last week, however, and left-leaning Citizens for Responsibility and Ethics in Washington had a field day. A spokeswoman for the RGA, Gail Gitchko, offered this riposte:

CREW accessed those documents from behind a password-protected website. CREW hides behind the facade of an educational group when their only real purpose is to act as a liberal front group for Democrats.

As usual, the truth has a partisan agenda. Just because representatives from Coca-Cola, Aetna, Koch Industries and Exxon Mobil donated $250,000 apiece to spend policy weekends with Republican governors doesn’t mean they were paying for access. Oh, wait—it absolutely means that, 100%. But Democrats do it too.

I remember this country’s glory days, when you got things done not by giving money to politicians, but by holding for ransom 35,000 pounds of chicken. In a related story, 35,000 pounds of rotting chicken was found abandoned at Missoula’s Flying J truck stop. Initially, people assumed the smell was coming from Fred’s. It turned out to be 17 tons of raw chicken valued at $85,000, in a semi trailer owned by Dixie River Freight. The driver texted his boss at Dixie River to say he’d return the chicken in exchange for cash, but Dixie River called his bluff. Kombat! Kids, I cannot reiterate this enough: in a hostage/ransom situation, you must have a second buyer or disposal plan. That chicken/child of privilege is an asset for them but a liability for you, and they know it.

I guess a child can be a liability for them, too, but it’s a burden borne more lightly. Casey Gloria Allen’s burden got a little lighter Tuesday, when a district court judge in Hamilton dismissed the felony endangerment charge against her. You might remember Casey Allen from earlier this month, when a judge lambasted her for impregnating herself and upheld a prosecutor’s decision to charge her with child endangerment for failing a drug test while pregnant. Judge Jeffrey Langton, however, pointed out that the endangerment statutes do not mention fetuses and suggested it was pretty obvious what was going on:

[The state is on a] slippery slope of arresting and filing charges against very early term pregnant women for engaging in any behavior deemed unhealthy to the fetus, which might include ingesting drugs (legally prescribed or not,) drinking alcohol, smoking, failing to wear seat belts in a vehicle, not eating well, and exercising too little or too much.

Can you imagine a society in which county governments oversee the exercise of pregnant women? Until that day. Anyway, Deputy Ravalli County Attorney Thorin Geist exposed himself as a member of the Taliban, and now he has been corrected.

Not every exposure is bad, of course. Most of them are, because usually the things we expose are secrets, but sometimes we also expose feelings that we don’t normally talk about. Jack Handey’s remembrance of Phil Hartman in Slate is not as clever as his other work, which is how you know he was deeply affected. I also agree with his theory that Hartman did not rocket to success outside SNL in part because he was too versatile. The man was a comic actor, not just a comedian. Even as Frankenstein singing a Christmas carol, he makes an emotional journey:

It pleases me so much. Probably, my love for TT&F reveals something about me—something disturbing. Sooner or later, though, everyone sees us for what we are.

I have revised my earlier position. Corin is the hot one.