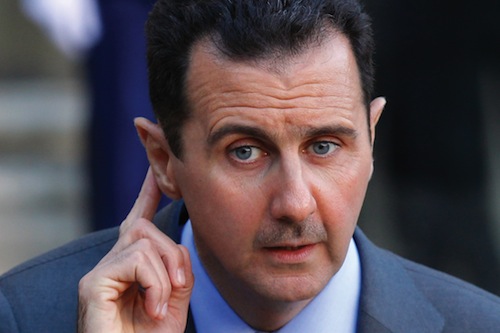 Bashar al-Assad, barely winning the race to be the biggest dick in Syria

With the US at the top of its game and no other foreign entanglements to distract us, I can’t think of any reason not to bomb Syria. Assad used chemical weapons. That makes him an even worse bad guy, and the only thing that stops a bad guy with sarin is a good guy with laser-guided bombs. Unlike poison gas, bombs only destroy buildings and weapons. Bombs are pretty much the opposite of weapons, if you think about it long enough. Don’t think about it too long, though, because then you might ask a terrifying question: whom are we bombing for?

One of them is “The Uncle,” depicted in the New York Times reciting a poem about revenge before executing captured Syrian soldiers. The Uncle is one guy, and there is no reason to believe that he reflects the overall complexion of the Syrian opposition. Then again, there is no reason to believe he doesn’t, either. The signature feature of the Syrian opposition is that we have very little information about them.

We don’t even know how many there are. Lifelike Secretary of State John Kerry estimates that there are between 70,000 and 100,000 “oppositionists” fighting to unseat Bashar al-Assad. The simple question of how many there are incurs a margin of error of 43%—but who are they? In an exchange with Representative Michael McCaul (R–TX), Kerry described 15% to 20% of them as violent extremists. McCaul said he heard it was more like 50%. Neither man cited a specific census.

So there are between 10,000 and 50,000 religious fanatics trying to bring portions of Syria under Islamic law, along with a comparably unknown number of moderates, plus Assad’s estimated quarter million. Our best-case scenario is that we will distinguish among these people and adjust the Syrian civil war in their favor using bombs.

Our worst-case scenarios are more numerous. I lack both the information and the tactical expertise to say whether the United States can effectively alter the course of events in Syria without A) killing lots of civilians, B) destabilizing the region or C) sinking into another 10-year quagmire. Probably, we cannot. But even if we could, would it be ethically proper to do so?

Assad used chemical weapons, probably. He used them on his own people, which is some high-level dicketry, but from an ethical standpoint it is only somewhat worse than killing his people manually with guns and sticks. From the standpoint of international law, our causus belli is the chemical weapons thing. So bear with me and my analogy:

You are walking down the street with your friends after bar close, and you observe two people in a fight. One guy is bigger than the other, but they appear evenly matched and fight for a long time. They knock over a garbage can as they are rolling around, and the big guy seizes a can of Raid and sprays it in the other guy’s face. Amid screams and curses, they go on fighting.

Do you intervene on the side of the other guy because the big guy used the Raid? You know he is a scumbag for doing it, even if the relationship between the two men and the reasons behind the fight remain murky to you. But the facts remain: two guys fighting, big guy fighting dirty. Is that enough moral imperative to compel you to intervene, even though you’ve been drinking and you kind of have to poop?

Followup question: what if the only way you could intervene was by throwing a bottle high into the air and attempting to hit the big guy on the head?