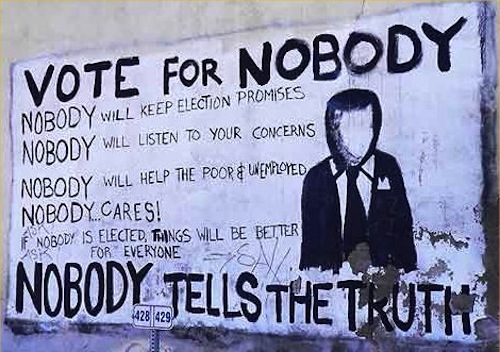 As Winston Churchill once remarked, democracy is the second-worst system of government, after security-state corporatocracy. The problem with the will of the people is that people are dumb. They’re especially dumb compared to your average NSA cryptographer, Fortune 500 CEO, US senator or anyone else who might reach a position to decide whether the governed should govern much themselves. But democracy never had a chance like this before. For the first time in human history, we can know the opinions of ordinary people from all over the world almost instantaneously. Today is Friday, and the will of the people is better known to us than ever. Won’t you marvel at its inanity with me?

Remember Change.org, the site that was going to revitalize democracy by making it easier for people to petition the government for redress of grievances? Now it’s a venue to complain about Hollywood casting decisions. More than 17,000 people have signed a petition asking Sam Taylor-Johnson to recast the forthcoming film version of Fifty Shades of Grey. It reads as follows:

Matt Bomer is the PERFECT DESCRIPTION OF CHRISTIAN GREY AND ALEXIS BLEDEL IS THE PERFECT ACTRESS TO REPRESENT ANASTASIA STEELE and if THEY ARE NOT, NOBODY WILL BE And I read the whole trilogy and I can assure that Matt is the perfect actor for this movie and Alexis too. So please PLEASE, all of the GREYsessed and Bomerettes in the world NEED those actors. They always will be for us the Christian Grey and Anastasia Steele. WE CAN DO ANYTHING GUYS, ANYTHING.

Anything except perceive the limits of our own understanding, guys—ANYTHING.

The thing about the internet is that everyone you’re communicating with is 14. You assume that all those faceless people are just like you, and then you read their weird gibberings and get scared on several levels. Fortunately, those people are children—children like Bashar Assad’s 11 year-old son, who posted on Facebook that he wished the US would attack Syria. From this article, we also learn that Hafez Assad goes to Montessori school in Damascus. That is weird.

You know what else is weird? The NSA lost the public debate over its attempt to build a government-accessible back door into encrypted communications via the Clipper Chip in the 1990s. Then it went ahead and did it anyway, in secret, because who cares what the American people say? Obviously, the people on whom you are spying will not give you permission to spy on them. The NSA wants to spy on Americans, so it need not bother asking our permission to do anything. It can negotiate agreements with Google and Microsoft and other major telecom companies instead, and if we don’t like it we can stop using the internet and go work in the service industry.

I personally prefer unmediated, face-to-face contact with other human beings out in the real world, where I can force them to look at my genitals. Missoula law enforcement has gotten “at least seven” reports of indecent exposure in the last week. Police are looking for a white man between 5′ 6″ and 5′ 10″ who “may be wearing a black mask or a long-sleeve black shirt, and could be naked from the waist down.” With the shirt and no pants, I would say they’re looking for Porky Pig, except he is also described as skinny with possibly reddish facial hair. So it’s me. I just want attention.

Here’s what really deserves your attention, though:

Spencer sent me this video with the note that if I didn’t love it, he doesn’t know me at all. He continues to know me very well.