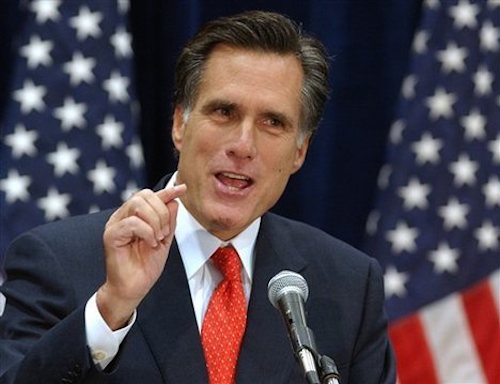 Mitt Romney about to fuck up

Your friend and mine Ben al-Fowlkes sent me this wonderful Times article about Mitt Romney in retirement, noting the former candidate’s lament that “darn geese keep pooping all over the lawn.” That was my favorite part for a while, until I got to the part where Ann lays out cold cuts, bread, and “a selection of both mayonnaise and Miracle Whip.” But even that was surpassed by Mark Leibovich’s genius insight that “as a candidate, Romney often appeared as if he were bracing for a light fixture to drop on his head.” True. So why is Mitt Romney so funny? 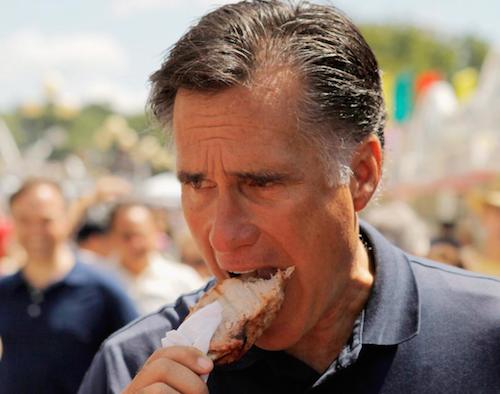 Here is Romney made miserable by a pork chop. The ready explanation for why he is so funny is that he is a sad sack. As epitomized by his failed bid for the presidency, Romney often finds himself in a position to reach for the brass ring but never quite manages to grasp it. He is a Wile E. Coyote figure.

In life as opposed to cartoons, such people are normally not funny but sad. Romney, however, is rich. You don’t feel bad watching him blow it again and again, because he has five houses and a quarter billion dollars.

He is a living refutation of Aristotle’s claim that comedy should be about low people. It’s okay to laugh at him, because regardless of what occurs during the rest of his life, he will be fine. He was born a governor’s son, and he will die rich. What happens between is light entertainment.

Support for this theory of Romney’s comedic appeal: he is funniest when he screws up because he is rich. One of my personal favorite Romney adventures was when he got booed by NASCAR fans and then burned them for wearing cheap raincoats. And who can forget his early experiences with black people?

Tyler Perry he is not. I submit that in these moments, Romney’s comic persona turns on three essential characteristics:

Romney reflects an America in which nothing bad happens to rich people no matter what they do. The worst damage they can inflict on themselves is to expose their own ignorance, to demonstrate that they are no wiser or more competent than the people who clean their many cars. They do, however, think they should be president. We all do, which is why Romney is ultimately not just funny but likable.

Mitt is an everyman. In his love of Baha Men and Miracle Whip, he is essentially your doof neighbor. But he is also, as I may have mentioned, insanely rich. Presumably he was very good at investing or running meetings or whatever when he was at Bain Capital, but we never saw that Romney. We’ve only seen the Romney that screws up, so his wealth seems completely arbitrary. To watch this arbitrarily elevated man prove his good fortune by blowing opportunity after opportunity is like watching Brewster’s Millions if Richard Pryor were not doing it on purpose.

It is also to watch a man seemingly at the mercy of fate. He was born rich, yet paradoxically he cannot win. What makes Romney not just a good comic character but a great one is the way nothing in his life seems to happen for any reason. We watch him and wonder how such a person became the Republican nominee for President, but we also wonder why he couldn’t do anything with it. It seems like fate is tantalizing him, which gives his real-life experiences the flavor of written escapades.

Probably, Romney’s life does not seem funny to him but rather kind of tragic. He works hard; he plays by the rules, and what does he have to show for it? Two failed presidential bids and an outtake reel. Sure, he’s also got several houses and cars and millions of dollars, but he started out rich. When is he going to get ahead? To which we say, welcome to America, Mitt.