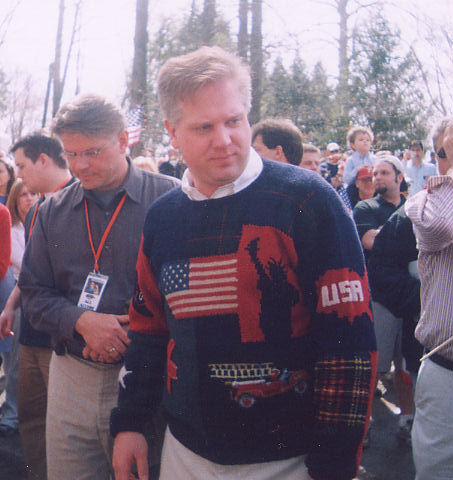 Probably, Hugo Chavez is designing White House domestic policy—everybody knows that. Let’s examine the two primary clauses in Beck’s sentence, though. If I read it correctly, he’s saying that A) we don’t know what Barack Obama’s plan for the nation is and B) the plan appears to be the work of unions and socialists. These two statements are, of course, utterly contradictory. I don’t know what the contents of Glenn Beck’s head are, but it seems more and more like several bundles of hair and string, plus about fifty Slim Jims. His piece is a masterpiece of bogeyman-ism, filled with unfalsifiable assertions like “The tools to build their ultimate new America will be buried in these bills — tools that you won’t even see because you don’t know what tools they need.” The Obama plan for America is total and reprehensible, and we can’t see it because we don’t know what it is. It’s everywhere, like the Force, and it’s nowhere like, um, the Force. All we really see are its architects, and as Beck says, “until we know where the people in Washington stand on the Constitution, nothing should pass.”

Frankly, we should have made these people swear some sort of oath to uphold the Constitution before we even let them take office, but it’s too late for that now. Beck then embarks on a long digression about Cass Sunstein, Obama’s newly-appointed regulatory czar who, according to Beck, believes that dogs should have lawyers. It seems possible that Sunstein’s position is being misrepresented, but that’s not the point. The point is that anyone involved in the federal government is prima facie unqualified to run the federal government. “People in Washington don’t get it,” Beck reminds us, without specifying what “it” is. “You know it.”

At this point, if you’re like me, you are once again cruising eBay for a long, curved sword. My usual course of action when presented with such arguments is to remind myself, for the purposes of stable functioning, that Glenn Beck is an entertainer. That’s the standard argument deployed by right-wing blowhards when confronted with their evidently deleterious contributions to political discourse. Rush Limbaugh and Bill O’Reilly don’t really have to believe that Barack Obama is equivalent to Hilter, because they’re just putting on a show. It’s all in good fun, as Beck’s theatrical crying and baffling logic signal to the reasonable viewer. Glenn Beck is not a man to be taken seriously. He is a clown dressed up as a political pundit, and his exaggerated goose-stepping and accusations of socialism are just a grotesque of real American politics. It’s entertainment, and nothing more.

Except that while he’s just entertaining them, Glenn Beck is also constantly urging people to do things. CSI: Miami doesn’t end with the characters turning to the camera and telling me to go out and solve crimes in my hometown, but Glenn Beck keeps saying that I need to “Go to D.C. Go to your town squares. Get your neighbors to go to your home, local bar, restaurant. Take a stand. Enough is enough.” And what stand should I take, exactly? Beck doesn’t even know what the pervasive agenda is that we’re supposed to reject; he only knows we should reject it. He’s not selling a political position so much as a lifestyle. Glenn Beck’s audience tunes in knowing they will agree with him in advance, and their political positions are no more the subject of debate than are punk rock hairstyles or hippie vegetarian diets. Being against health care reform and opposing all non-defense manifestations of the federal government is an identity for the Glenn Beck fan, not an opinion. Tea Parties and health care town hall protests are made for these people. They get to go out and yell, and their refusal to debate isn’t a flaw in their position but its cornerstone.

So we’re looking at a countercultural movement after all—and not a moment too soon, because Combat! was in danger of becoming a political blog. What are the hallmarks of the Glenn Beck Lifestyle? What does it mean to “never let these people tell you anything other than the truth?” As near as I can tell, there are two defining characteristics. The first is the refusal to participate in American political discourse, and the second is active participation in American politics.

The Glenn Beck person knows that just because you can’t prove something doesn’t mean it isn’t true. He can’t be convinced by the arguments of elected representatives or professional policy analysts, because those people are out of touch with Real America and probably have a secret agenda anyway. He only listens to the truth, which means he has to detect it in advance. He’s not sure what Glenn Beck is going to say next, but he agrees with him. Most importantly, he knows he has to stand up—stand up against the federal government, stand up against creeping socialism, stand up against death panels. His Senator can tell him there are no death panels in the actual health care bill, but he doesn’t get his opinions from some Washington type. As Beck puts it, “I can make the decisions for my own life. And if the government doesn’t like it, they can get the heck off my land.”

That last part sounds a little militant, doesn’t it? Beck’s primary concern is not that the American people be well-informed, but that they be strong. Like the guy who’s always urging his retarded cousin to go lift weights, he wants a force disembodied from any decision-making process. He is building a big, dumb voting bloc in American politics, presumably so he can deploy it whenever his own position becomes logically untenable. There’s a word for that kind of person, and it’s not “showman.” It’s “demagogue.” Call him a panderer, call him intellectually dishonest, but don’t call him an entertainer. He is writing a play about what happens in America tomorrow. His audience brought their guns to the theater.