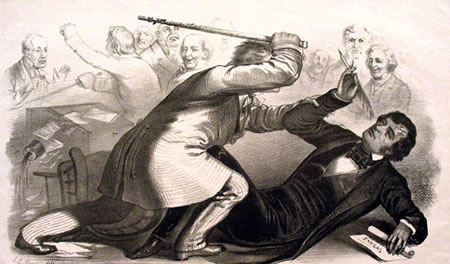 Artist's depiction of Preston Brooks beating Charles Sumner with a cane. How much better was the newspaper when it was full of drawings like this? Also, I believe we're looking at a primitive use of the butterfly guard.

Provided you’re not operating on the same two-day news lag that I am, you’ve probably already heard about Joe Wilson’s outburst during the President’s address to Congress on health care reform. Wilson shouted out “you lie!” in response to Obama’s assertion that his proposed reforms would not provide health care to illegal immigrants, initiating a brief instance of what Pete Campbell‘s mother would call “arguing over facts.” “It isn’t true,” the President said before moving on. Let’s take a second and settle this now: H.R. 3200, along with all the other reform proposals currently under discussion, specifically forbids the use of federal funds to provide coverage to illegal immigrants. Now that that’s out of the way—and really, couldn’t Representative Wilson have done a quick Google search on his way to shout stuff out from the floor of Congress?—let’s take a second to look at the historical context of Joe Wilson’s little ejaculation.*

First of all, calling the President a liar during a nationally televised address to Congress is a breach of decorum, but it’s only a shocking breach of decorum if you don’t know Joe Wilson. According to the utterly bomb-ass Center for Responsive Politics, Wilson has long been a favorite of the health care lobby, and the campaign contributions he has received from “health care professionals” total nearly a quarter million dollars. Factor in donations from insurance companies, the pharmaceutical industry and hospitals, and he’s raked in another $227,000, making him beholden to the broader health care industry for nearly half a mil. It’s too bad I didn’t have $500,000 to spare, or Joe Wilson could have interrupted the President by yelling “Combat blog rules! Ass!” on Wednesday night. Representative Wilson—who is, just for fun, a former aid to convicted vampire Strom Thurmond—claims that his outburst was not premeditated, and to be fair he does have a history of shouting at people. More importantly, though, he’s from South Carolina—a state that makes grotesque violations of Congressional etiquette a veritable tradition.

As Czar Peter the Franke pointed out to me recently, and as I remember from explaining US History to very bored New York prep school students, perhaps the most egregious moment in the history of Congress came courtesy of a South Carolina congressman. In 1852, when the country was divided over the ethically complicated question of whether black people were, like, property, junior Senator from Massachusetts Charles Sumner delivered a controversial speech called “Freedom National; Slavery Sectional.” In it, Sumner attacked the 1850 Fugitive Slave Law—which required the governments of free states to return runaway slaves to their owners, and led to posses of pro-slavery activists conducting armed raids across state lines—in a three-hour disquisition that included an extended metaphor impugning fellow Senator Andrew Butler. According to Sumner, Butler had taken “a mistress who, though ugly to others, is always lovely to him; though polluted in the sight of the world, is chaste in his sight—I mean, the harlot, Slavery.” By nineteenth-century standards, it was extraordinarily scathing attack.

Two days later, Sumner was approached in the nearly-emtpy Senate chambers by South Carolina Representative and nephew of Butler, Preston Brooks. Brooks accused Sumner of libeling both the Slaves ’n Tobacco State and his uncle, and before Sumner could stand up set to beating him about the head with a heavy cane. Sumner collapsed unconscious into the aisle, whereupon Sumner continued to beat him until the cane broke. Then he bounced, fleeing to the South where he lived as a Confederate hero until his death two years later. Sumner, for his part, did not return to the Senate for three years, and even then suffered from headaches, nightmares, and what would now be called Post-Traumatic Stress Disorder but was then known as Totally Got the Tar Whacked Out of Him With a Cane Syndrome.

The Sumner-Brooks Affair is considered  a moment of symbolic significance in the mounting tension between North and South during the years leading up to the Civil War. Brooks’s attack, aided and abetted by three other congressmen, exposed a national politics conducted by two sides more committed to their own rightness than to the sanctity of American democracy. Compared to giving an old man a closed head injury with a cane, calling the President a liar on TV is pretty slight, and Joe Wilson is probably as much a hothead with poor judgment as he is a well-paid corporate stooge. He is at least of equal part the latter, though, and that he was willing to make history on Wednesday testifies to the enormous power of money in the debate over health care reform.

It also testifies to the tragic limitations of reason in a rough-and-tumble representative democracy. Preston Brooks smeared across the Senate floor in thirty seconds the ideas Sumner took three hours to explain, and Wilson’s two-word outburst overshadowed a Presidential speech weeks in the making. If the discourse on Capitol Hill has really been reduced to “You lie!” and “It isn’t true,” maybe it’s time for the Democrats to abandon the illusion of consensus, total up the votes and play whatever hardball politics it takes for a party controlling two branches of government to pass a damn law. It would be nice to pass a health care package everyone is happy with. In this case, though, the tie goes to doing nothing at all, and it would be a shame to see this desperately-needed legislation derailed by a political party whose very congressional representatives are misinformed and yelling about it.