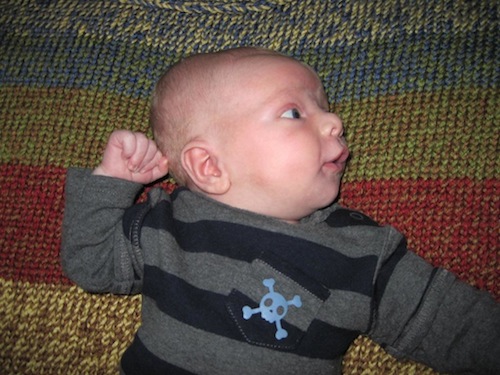 So I got him this skull-and-crossbones onesie because, you know, he likes that kind of thing. He's always been kind of alternative, kind of positioning himself against society, and of course it's a good memento mori.

Another Brooklyn bar bans babies, and—except for the headline writers at the New York Post, who are thrashing in their isolation tanks with glee at the alliteration—polite society girds itself in anticipation of another bitter argument. Nothing makes us angry like a baby. On Thanksgiving day, you can grab the turkey and make it dance around your friend’s kitchen like a puppet, have it drink a whiskey and tell a series of bone-and-breast jokes to his wife, then throw it back in the oven without even rinsing it off and be lauded as a great wit. But do the same thing with his baby and suddenly you’re a monster. A baby is like a pack-a-day smoking habit, turning friends against friends and making bars, funerals and other usual places of agreement into sites of bitter controversy. Ever since Brooklyn’s Union Hall unsuccessfully tried to ban strollers—and made the New York Times, thereby elevating the whole issue to the status of Real Thing That Is Happening—public drinking in America has fixed on one question: Should babies be the unwanted center of everyone’s lives? Or just their parents’?

Like babies themselves, that last apostrophe is important, but also maybe unnecessary. Let’s make one thing clear from the beginning: your friends with babies wish that babies weren’t around, either. Even if it wasn’t the result of literal, mechanical accident—your girlfriend had a fight with her roommate so she replaced seven of her birth control pills with Dippin’ Dots; you were using the withdrawal method and you sneezed—every pregnancy is unintentional. No one intends to get so old that they have to find a full time job and marry somebody and give up on their original dream of riding a dinosaur through space. That’s what you wanted to do when you were a kid, right? In retrospect it seems kind of unreasonable—narcissistic even—which is why nobody wanted to talk to you at the bar. It’s also why, now that you’re thirty-four and not regular four, continuing to go to the bar even though your wingman is eating crayons and defecating them directly into his pants seems like the most important thing in the world.

“Psychologically, you feel like, ‘Oh, my life hasn’t changed that much,’ although of course it completely has.” So says Christen Clifford, a woman who, according to the Times, “proudly recalled breast-feeding her son, Felix, at the bar before ordering a martini.” First of all, when I die and go to that one hell where I get everything I want but in a way that is terribly ironic, I will go to the bar in the hopes of eventually seeing a woman naked and be confronted by relentless breast-feeding. Second, Christen Clifford is the saddest thing in the world. As if it weren’t enough to give her occupation as “writer and actress” in addition to full-time, stay-at-home mom, she has captured with her remark the grim horror of the temporal self.

The thing you are now is almost certainly not the thing that you wanted to be. When I was twenty, I wanted to combine punk rock and radical marxism to create performance art that influenced American culture toward social justice. Now, I own a knee brace.  At any moment, you are almost guaranteed not to be the kind of person that you used to want to be, yet you are undeniably the same person that you were. It is, therefore, your fault. The more you cling desperately to your past self, the more you are reminded that you have betrayed him. Nowhere is this harrowing contradiction more evident than in the act of having a kid. Fortunately, it also offers a uniquely satisfying out.

Biologically, your child is mostly you. Sure, fifty percent of the genes come from your spouse, but your spouse is a person you chose, probably in large part for his or her similarity to the kind of person you are. Your baby is basically just you, only younger. Pause for a second to let the wonderfulness of that idea sink in: you, younger, your whole life ahead of you. In cities, this realization accounts for the widespread phenomena of punk rock babies—the enormous and depressing availability of baby sweaters with skulls on them, Ramones onesies, and those hats that are like mohawks made of yarn. The sight of a toddler stumbling around in a shirt that says “No Future” in enormous red letters may seem unsettling at first, but why shouldn’t your kid like the Sex Pistols? After all, you like them. And why shouldn’t your child be allowed to hang out in the bar? After all, you like hanging out in the bar, and if everyone else were to decide that your kid was somehow the kind of thing that shouldn’t be there, what would that say about you?

To those of us without children, of course, this line of reasoning is no good. If we’re above thirty, we’ve managed to become old without securing the one aspect of aging that could possibly comfort us, and we need as much order and quiet as possible to help us drink. Those of us below thirty would find it a little easier to convince wasted girls to leave with us were someone not continually demonstrating that a baby is a thing that can happen to you. In any case, the sudden shriek of a toddler is a clarion reminder: for those with babies, of the limitlessly possible past, and for those of us without, of the terrifyingly inevitable future.

Nobody likes the future. If you’ve got a baby, being forced to stay home with it when you want to go the bar is a reminder of the 6,570 or so nights ahead of you when you will have to do the same thing. Going to the bar without it is even worse, since it evokes an old age during which you and your wife have nothing to talk about but your baby, who no longer wants to hang out. In either case, a night without both the baby and the bar is a night spent contemplating the ever-changing and therefore ever-worsening self.

The terrifying blog Dadwagon reports this complaint from a young woman in Park Slope: “If I go to the bathroom to correct my wayward mascara at the end of a long weekend night, I don’t want to watch a baby being wiped down on the soggy sink counter.” Dadwagon argues that “this makes no sense,” and I’m sure to them it doesn’t. Why wouldn’t I want to open a door and see another human being smeared with feces immediately after I drank six beers? The answer, of course, is the same reason I wouldn’t want to walk into the bathroom and see you in the same condition. That baby is a person just like you, and just like me, which makes it completely infuriating. It’s why we came to the bar in the first place, and why we feel compelled to drink ten Goldschlagers while we’re there, and why by the end of the night all of us—parents, single bachelors, babies and toddlers—just want to go home and throw up and go to sleep, in whatever order seems easiest.