It’s understandable the Clinton campaign would attribute some of Trump’s popularity to his wealth and attack him accordingly. The #PoorDonald hashtag is a jab at his refusal to release his tax returns, and it’s obviously ironic. Even if Trump doesn’t have billions of dollars, he’s still not poor by normal Americans’ standards. But calling him poor—making a derisive talking point out of his paltry $100 million—is hardly a strategy to win over voters who think politics is rigged in favor of the rich.

This seems particularly true of disillusioned Sanders Democrats who worry Clinton doesn’t care enough about inequality. When Clinton says successful businesspeople have a lot to offer her campaign, she is probably thinking about contrasting them with unsuccessful businesspeople like Trump. But she is also saying she wants to bring more rich people into her fold. That is the wrong message to send to Democratic voters now divided over the issue of wealth inequality.

Inequality is not some pet theme of the Sanders bloc, either. It is a real problem that matters to the vast majority of voters across the ideological spectrum. Check out this fun graph: 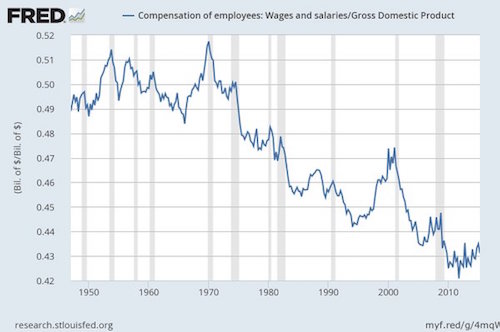 That’s not from the Daily Kos forums; that’s data compiled by the Federal Reserve. Regardless of whether America is getting great again or never stopped being great, our economy is paying people less. The steadily shrinking fraction of GDP that Americans get for actually working explains how wages have remained stagnant while productivity has skyrocketed, or why the investment economy has recovered from the 2008 crash while pay and employment haven’t. It also explains why questions of class—of moneyed influence on politics, of immigration, of medical insurance and debt, of the decreasing number of intersections between Wall and Main streets—have dominated this campaign.

Within the Democratic party, young people are mad at rich people. Clinton fares poorly against Sanders with Democrats under age 50. But she makes up the difference by doing very well among two other blocs: people of color and people who make over $100,000 a year.1 It’s probably safe to say that running against Trump in the general, Clinton will have the nonwhite vote sewn up. Is she now pivoting to her other natural base of support? This #PoorDonald business might be a sign that, far from being pulled to the left as conventional wisdom holds, her experience with Sanders has led her to court the $100k-plus vote among independents.

That’s what her husband did in 1992, and it worked. But the middle class was bigger then, and people who made $40,000 a year felt more solidarity with high-earning professionals than they do now. Perhaps, in 2016, deriding Trump for not really having a billion dollars is a bad look for the hundred-millionaire wife of a president to adopt.

But what are poor people going to do—vote for Trump? The guy’s a New York real estate mogul. He made his money in the most disgusting way imaginable, whereas the Clintons raked in a hundred million through politics. When you put it that way, #PoorDonald seems to brandish the knife handle-first. I still think Hillary will beat him in November. But if there is a way to lose to Trump, her campaign seems to be hard at work finding it.