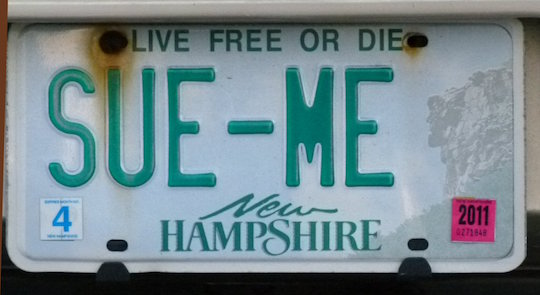 The 1980s contributed so many dismissive catchphrases to our shared vocabulary: “get a life,” “don’t have a cow,” “peace through strength.” These were insurmountable arguments against anything someone else cared about. I remember when my cat died in seventh grade, and I was sad at school, and my classmate told me to get a life. What a burn! In that moment, my central concerns were unimportant—not merely misplaced but nonexistent, failing to even constitute a life. Yet for all his lordly dearth of empathy, the person who says “get a life” remains a third party to whatever problem he dismisses. The real boss move is to dismiss misery you yourself have caused. To that end, no catchphrase beats “so sue me.” It reduces your relation with your interlocutor to the law and whatever money they can extract from you. Today is Friday, and we owe one another no more consideration than that. Why don’t you do something about it with me?

First, the good news: Ravalli County has successfully sued absconded treasurer and Montana’s most entertaining political story Valerie Stamey. The bad news is she’s probably not going to respond. But after two years of searching, they found her in South Carolina. Stamey vanished in 2014, shortly after the Ravalli County Commission sued her for $29,000, citing 58 derelictions of duty at $500 apiece during her nine-month tenure as treasurer. Investigators found $780,000 in uncashed checks on an around her desk. The wife of a Republican precinct captain, Stamey took office with no prior bookkeeping experience, a series of past aliases, and a failure to appear for a fraud judgment in South Carolina. She might not show up for this one, either. But at least she’s been served.

Meanwhile, among people who deposit their checks, Thomas Frank wonders why the alternative to Donald Trump must be “self-satisfied, complacent Democrats.” The Republican Party has nominated the most unfit candidate for president in modern memory. Faced with a repellant billionaire whose very speech patterns are a cultural shorthand for dishonesty, Democrats could take this opportunity to bring the country along. Let Americans choose between Trump and single-payer health care, or Trump and oversight of Wall Street. Instead, and I quote:

Hillary Clinton is more or less openly offering herself as the complacency candidate. The least inspiring frontrunner in many years, she is a dynastic heir who stands to receive the Democratic nomination largely because it’s her turn – the logic that made Bob Dole the GOP leader in 1996. Clinton has scolded her rival for wanting to break up Wall Street banks since such a policy, by itself, would not also end racism and sexism. (In point of fact, the black middle class was disproportionately damaged by the detonation of the housing bubble.) Clinton’s unofficial slogan, “America never stopped being great” — supposedly a searing riposte to Trump’s “make America great again” – sounds like the kind of thing you’d see inscribed in a country club logo. In her words, we can hear the call of contentment, a would-be catchphrase for a generation of satisfied people.

Here is your American politics: one party of the investor class that’s socially conservative, and one party of the investor class that’s socially liberal. But what are you going to do—vote for the assholes? Hillary may be the complacent alternative to Trump, but she’s still the alternative. In the aftermath of Nevada’s disastrous Democratic convention, she has stepped up her calls for Bernie Sanders to drop out of the race. Probably, he should. He’s not going to win. But the Clinton message has reached its most mature form, in which running against her is not just doomed but illegitimate:

“He said the other day that he’ll do everything possible to defeat Donald Trump. He said he’d work seven days a week. I take him at his word,” Clinton said. “I think the threat that Donald Trump poses is so dramatic to our country, to our democracy and our economy that I certainly expect Sen. Sanders to do what he said he would.”

It’s that kind of smug insistence on her own inevitability that will carry her all the way to the White House. Voters love a sure thing.

Meanwhile, in the realm of reducing ostensibly real people to ciphers for their group identities, New York Magazine has published this transparently fictional account of a date between a wise if horny black man and a clueless if well-intentioned white women. I’m going to say that 15% of these events actually happened. For example, his date teaches at a public school off the Grand Concourse in the Bronx. Only after he declares it a terrible neighborhood and she takes offense does he tell her he grew up there. Obviously, when your first date says she teaches near your childhood home, you don’t mention it. You save that fact for when it will puncture her white-liberal sanctimony. Also, whoever named NY Mag’s new men’s section “Beta Male” is destined for greatness.