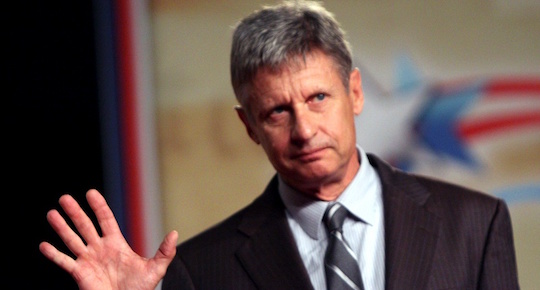 I kid, I kid. Plenty of people who aren’t college students support libertarian politics. As the system of government that appeals to both people who own hedge funds and people who own wood-burning stoves, libertarianism has a natural place in American democracy. It is the Sprite to the Coke or Pepsi of our two-party system. Perhaps never before has the Libertarian Party’s role as an alternative been more clear than it is now, in 2016, and also here, in this sentence:

Given that Trump and Clinton are sporting historically high negative ratings, Johnson’s polling makes a fair bit of sense; Gary Johnson is neither Donald Trump nor Hillary Clinton.

At first I thought FiveThirtyEight’s disapproval ratings for Trump and Clinton were lower than others I had seen, around 52% and 38% respectively, but then I noticed those were the percentages of people who strongly disapprove. Here’s the Washington Post putting both their overall unfavorable ratings at 57%. That means even if most people who dislike Hillary adore Trump and vice versa, there is some mathematically necessary overlap in their unpopularity—a 10% or so of Americans who dislike them both.

Enter Gary Johnson. He just came to look for unused light bulbs and strip copper wiring out of the walls, as is his right. Make him president, and the pelts will flow freely again. Again, I kid. Libertarianism is a developed philosophy of government encompassing far more than mere negations of the modern state. I tried to learn about it by attending a Libertarian meeting, but everyone was so mad that someone called a meeting they all stayed home to post about it on 4chan. At least now I have a Bitcoin wallet.