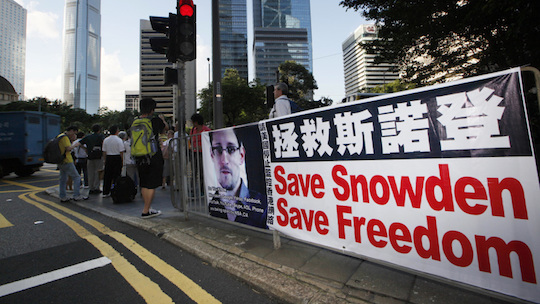 Last week, Congress passed the USA Freedom Act, which modifies the blanket surveillance programs the NSA was totally going to tell us about before Edward Snowden committed treason by telling us first. Obviously, the USA Freedom Act is a big improvement on the Patriot Act. Look at the names. Patriotism is good, but it’s only a means to certain ends: namely, USA and freedom. Now that both those elements are secure, we can put Randy Paul back in his original packaging and sleep tight, right? That seems to be the message. If there’s one thing we know just hearing the name of the USA Freedom Act, it’s that Congress wants to assure us everything is cool. Perhaps that should give us pause.

The main difference between NSA surveillance under the Patriot and USA Freedom Acts is that the latter ends so-called “section 215” collection of calling metadata. The federal government will no longer record information about every American’s phone calls and internet use in bulk. Instead, phone and internet companies will record that information in bulk, and the federal government will only be able to access it with a court order.

The USA Freedom Act strengthens the FISA court’s oversight authorities and expands public access to it, including declassification of significant legal decisions and the appointment of an amicus curiae board to represent the public interest in FISA hearings. Plus, it increases the maximum penalty for “material support for terrorism” from 15 years to 20 years. But the important thing is that, thanks to The USA Freedom Act, the NSA will stop vacuuming up all that can be known about every phone call and internet search in the United States.

Then again, maybe it won’t. Eighteen months ago, when the House Judiciary Committee was debating a much more restrictive USA Freedom Act, Deputy Attorney General James Cole remarked that it would all depend on FISA court interpretations anyway. If you recall, the FISA court is secret. In theory, the USA Freedom Act will make its most significant decisions public, unless doing so would jeopardize national security—a decision the FISA court also makes in secret. But in that case, it must provide a summary of the decision.

The summary could be, “the NSA can keep collecting bulk metadata, because we got a court order saying everyone’s contact list is two degrees separated from someone involved in a terrorism investigation.” That might be legal under The USA Freedom Act. Even if it weren’t legal for the NSA to collect such data directly, the FISA court might allow the agency to get all of it from phone and internet companies. It depends on how that court construes the word “relevant.”

As recently as two years ago, before Snowden told the world what the NSA was doing, FISA judges construed “relevant” to mean “everything.” Perhaps they will be more circumspect now that public opinion and a substantial bloc of Congress have rejected universal surveillance. But from a skeptical perspective, The USA Freedom Act leaves intact all the surveillance authority our federal overseers had before we knew they were abusing it. They’re just one step removed from the raw data—a step that can still be taken according to rules we don’t exactly know, interpreted by a secret court.

I guess I would feel more sanguine about these reforms if they arrived under a different name. Given how much latitude it leaves the federal government to interpret its own restraints, it seems a bad sign The USA Freedom starts by misleading us about what it does. It should be called the Surveillance Reform Act, or even the USA Protection Act. But at a moment when the feds have secretly surveilled us, gotten caught, and then promised to reform themselves, please don’t present “freedom” as a synonym for security.

Maybe, at this juncture in our history, America should admit that civil rights and national security are both good and occasionally exclusive. They are two competing values that we should balance, not a single, amorphous concept called “freedom.” Terrorists do not threaten our freedom. They threaten our security. Continued mass surveillance of US citizens’ phone and internet use does not protect our rights. It protects our security. And a nation of patriots will not make us free.