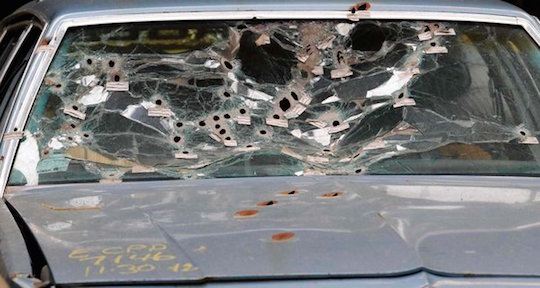 The car in which two unarmed people were killed by Cleveland police in 2013. Photo by Aaron Josefczyk

Sometimes it seems like a controversy is going to go on forever. For the rest of time, pillars of the business community will demand that schoolteachers carry guns for safety, and Their Eyes Were Watching God will remain an important book even though it sucks.1 But great controversies settle. Temperance is over. Nobody has been called upon to recant his model of a heliocentric system lately, and gay marriage might become boring within our lifetimes. Maybe the insoluble problems of our age are the settled facts of history. Today is Friday, another cut in the thousand by which disagreement lives for a while and dies. Won’t you answer the big questions with me?

First, the good news: Cleveland police have accepted “tough standards on force,” including new rules that “prohibit officers from using force against people for talking back or as punishment for running away. Pistol whipping is prohibited, and so is firing warning shots.” The mayor will have to think of a new slogan to replace Cleveland: Pistol whipped for talking back. Also, those aren’t actually rules: they are part of an agreement. But the city will be monitored, and if the monitor finds it isn’t complying with that agreement, boom—a judge will order it to comply. And then six cops will say “stop resisting,” knock the city to the ground, and pepper spray it.

Meanwhile, Patrick Stewart has settled the question of who the most measured person in the world is: him. The man who once ordered Worf ejected into space for insubordination2 has sided with a British bakery whose owners refused to ice “support gay marriage” on a cake. Stewart is gay and loves cake, of course. But he distinguishes between discriminating against a person and discriminating against an idea:

No one should be forced to write words they don’t believe, even in frosting, even in England. The one thing all societies agree upon is that the truth is good, and you shouldn’t be punished for saying it. Oh wait—I was thinking of never. Actual truth tends to murderously enrage actual societies, for example the United States. Our official position is that Edward Snowden should come back here so we can electrocute him for treason, even after we voted to curtail the security programs he told us about. Maybe it’s time we let him come back. His “espionage” has thus far compromised zero human intelligence assets, and the secrets he leaked about the American government he leaked to the American people. If schools don’t teach him as a hero 100 years from now, what kind of schools will they be? Laser schools, probably.

Meanwhile, a tan and well-groomed Bernie Sanders extols the virtues of corporations. I don’t really know anything about Photoshop, but I imagine that the men and women who shop photos for The Onion are the best in the business. Perhaps my favorite part about this short piece of speculative news, though, is how Corporate Bernie’s rhetoric is just real-world boilerplate. He doesn’t say anything Mitt Romney didn’t. As an old friend used to say, it’s funny because it’s true, and it’s true because it’s sad.

Sad is just happy on break, though. At least when you’re sad you’re invested in things. Since it’s a little after noon and I haven’t made any wild claims today, I’m going to say that art is the muddled line between happy and sad. For example:

My n-words are the only thing that moves me.