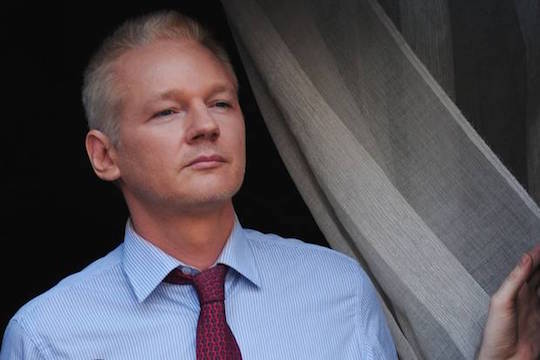 Julian Assange at the Ecuadorian embassy in London

Wikileaks, the activist journalism/espionage organization run by creepy weirdo Julian Assange, has offered a $100,000 bounty for text of the Trans-Pacific Partnership trade deal. I checked my computer, and I don’t have the .pdf. It turns out the terms of the Trans-Pacific Partnership are secret. Details of the 12-nation agreement—reputed to restrict the sale of generic pharmaceuticals, constrain fair use of copyrighted materials, and created an international trade court where corporations can sue national governments—are secret. None of that stuff I just listed is necessarily true. Right now, the text of the TPP is available to members of Congress, who can read the treaty in a special room but are not allowed to discuss its contents publicly. Representatives of about 600 private companies can also access the document via a secret internet portal. The general public cannot.

All this secrecy is both alarming and standard. International trade deals are commonly negotiated in secret,  because…okay, I just stared numbly at my computer for two minutes. I don’t know why international trade negotiations are secret, except that international trade is big and important. In a letter to US Trade Representative Michael Froman,1 Bernie Sanders called TPP “the largest free trade agreement in history.” He continues:

“It is incomprehensible to me that the leaders of major corporate interests who stand to gain enormous financial benefits from this agreement are actively involved in the writing of the TPP while, at the same time, the elected officials of this country, representing the American people, have little or no knowledge as to what is in it.”

That right there is why Bernie Sanders is not allowed to be president. Also, he’s got a point. Six hundred corporate executives are important enough that they get their own internet portal to the TPP, and it would appear they get to comment on it as it is written. Meanwhile, your elected representatives can only look at it in a special room after they promise not to tell you about it.

That’s alarming, especially since the document is rumored to give multinational corporations the power to sue foreign governments over environmental and labor regulations. Internet interpretations of the leaked Investment chapter of the TPP suggest that it gives corporations the power to file claims against member nations for “expected future profits” lost as a result of unfriendly laws.2 From a certain paranoid perspective, that seems like an agreement to make all other issues—social, democratic, and environmental—subordinate to business. Such a paranoid perspective would be easier to resist if my senator were allowed to tell me what the TPP actually does.

Why can’t Americans read this big, important trade agreement our government wants to sign on our behalf? Is it because we wouldn’t like it? Followup question: is there perhaps some historic precedent or basic value that suggests ordinary people should be able to communicate with their congressional representatives about which laws they like and dislike? Is there a word for that?

For the record, I agree with Kelly McBride that it’s unsavory to pay journalistic sources. That’s a tradition for good reasons. But it is even less savory that one of the president’s top legislative priorities must be kept secret from the American people, even as private companies weigh in. I remember the word for that kind of government, and it’s corporatocracy. This situation is ugly, but I am not sure that leaking the text of the TPP will change it.

Washington has already told us that the TPP exists. It has also told us we can’t see it. That seems a pretty strong indication that our opinions will be ignored, whether they are grounded in textual evidence or not. If three of your friends say, “We’re going into the laundry room to talk about your birthday; you stay here,” telling them you overheard their conversation and didn’t like the part about marble cake it is not going to get you Fudgie the Whale. By denying you knowledge of the discussion, your friends are necessarily denying you input.

Like, say, section 215 of the Patriot Act, the TPP seems one of those secrets we can uncover but not act upon. The president would rather we didn’t talk about it, but he is prepared to tell us to shut up. It’s disheartening that our federal government wants to keep so many secrets from us. It is depressing to think that it doesn’t matter if we find them out.