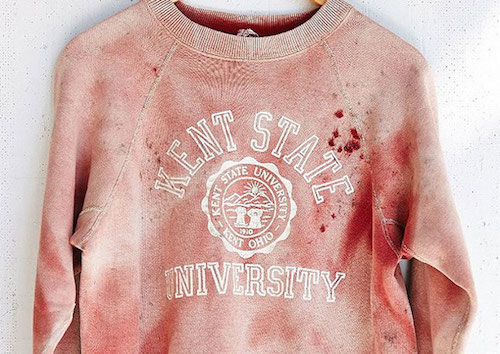 Last week, Urban Outfitters became the object of public outcry when it offered for sale on its website a Kent State University sweatshirt that appeared to be stained with blood. For those of you who shop at Urban Outfitters, Kent State was the site of a Vietnam-war protest that become a massacre when the National Guard opened fire on unarmed college students. So the sweatshirt is funny and timely. Nevertheless, CEO Dick Hayne felt compelled to defend Urban Outfitters in an email to employees:

In the last 24 hours we have received a lot of negative publicity and many of you have received communication from friends, family members or those outside the URBN community regarding a Kent State sweatshirt for sale on urbanoutfitters.com that was mistakenly identified as “bloody.” We wanted to address this with our community and provide some “facts.”

Discussion of what it might mean to put “facts” in scare quotes after the jump.

Haynes goes on to explain that the sweatshirt in question was purchased in a lot of vintage clothing, and that the apparent blood stains are actually the result of “natural fading and bleaching.” Possibly that is true. It sure looks like blood, though, and Urban Outfitters’ decision to open the bidding at $550 on eBay suggests they thought it was something more than a beat-up sweatshirt.

But I am not concerned with peering into the black box of Urban Outfitters’ corporate psyche. I’m more interested in why Hayne put the word “facts” in scare quotes. Are we meant to understand that he is giving us not fact but “fact,” not what is true but what is called true?

A clue to Haynes’s intent appears in his similar use of quotes around the word “bloody.” Here, the scare quotes are clearly meant to undermine the claim he is reporting. The Kent State shirt was identified as “bloody,” but that doesn’t make it so. When you are denying a description, you need to trouble its veracity even as you refer to it, e.g., I am writing to apologize for my behavior at your “party” last weekend.

You don’t want to do the same thing with your own claim, though. When Haynes writes that he wants to provide his community with “facts,” he suggests to his readers that “fact” is a word people say—just as they say that a shirt with red spatters on it promoting the site of a massacre is “bloody.”

Putting scare quotes around “facts” suggests that what we’re really getting is an official counter-narrative. It’s cool that the CEO of Urban Outfitters regards knowledge as instrumental, but he probably shouldn’t invoke that idea when he is covering his own ass.

That Kent State sweatshirt sure looks like it has blood on it. Haynes’s email reminds us that it’s not how things look that matter, but then he goes on to suggest that it’s not how things are, either—it’s what people say. He goes from Plato to Foucault in two keystrokes. Here’s a tip: if you’re going to supply a false counter-narrative, don’t flag it.

For those of you who prefer a simple rule of thumb, don’t put quotes around the word “facts.” We need some solid ground to stand on when we’re batting around claims. Once we start troubling the very idea of “facts,” it’s only a matter of time before we have to put scare quotes around other people’s scare quotes. If we’re not careful, we’re going to wind up working with “‘facts.'”