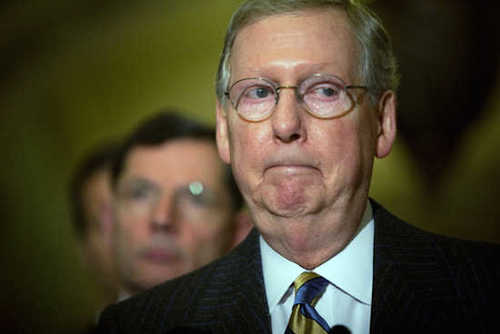 Not all of those 70% who think climate change won’t affect their lives believe we shouldn’t do anything about it, of course. Plenty of people consider global warming a serious problem that we need to address, even though they don’t expect to see the repercussions because they are very old. One suspects, however, that a certain population of Americans doesn’t believe in climate change because it would entail changing their behavior in the present to help a future they will never see.

Make no mistake: today’s senior citizens love the GOP, for pretty much the first time since the invention of Social Security. Since 2006, when Democrats enjoyed a 13-point advantage over Republicans among Americans age 65 and older, the numbers have shifted dramatically. By 2010, Republicans held a three point advantage with the same age group, for a total swing of 19 points.

That shift has ameliorated by a couple points since then, but seniors have remained solidly Republican at a time when Americans aged 18 to 64 have gone the other direction. There’s also this:

Senior citizens’ changing political preferences are also apparent in their recent presidential vote preferences, according to Gallup’s final pre-election polls. Senior voters favored the Democratic candidate in each election from 1992 through 2004, including a 17-point margin for Bill Clinton in 1992, the highest among age groups. In each of the last two elections, by contrast, seniors were the only age group to support the Republican candidate over Barack Obama.

Consider that last sentence again: the only age group Republican candidates have won in the last two elections are senior citizens. And Republicans are also the group that least believes global warming will have an effect in their lifetimes: 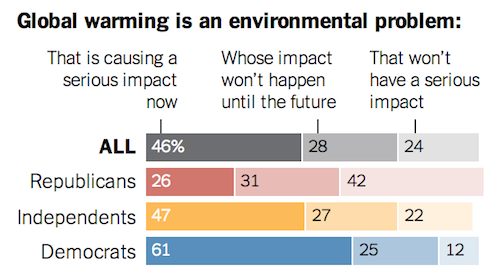 It’s a good thing that correlation is not causation, or I would worry that old people have chosen the party that tells them they don’t have to worry about climate change, that investments should pay better than work, and that we should cut funding for schools and put off fixing the roads. If I thought that, I would be forced to consider the possibility that today’s seniors care less about the future than any previous generation of Americans.

That would make sense, since when they were young they purported to be the generation that cared least about the past. But all of that is prejudice and assumption; there is little in these poll numbers to indicate that Baby Boomers deny global warming because they won’t have to pay the bill.

Something is drawing them to the GOP, though. The fact remains that of the two major American parties, one of them is constantly urging voters to invest in infrastructure and solutions to future problems, while the other believes the best course is to let everyone keep what they have now. It’s also the one that keeps demanding we take America back.

It’s no coincidence that the Republican Party embraced that message at the same time the largest generation of Americans got old. Quietism, nostalgia, resting on laurels—these are the comforts of age. They also happen to be courses the United States cannot afford to take right now. So it’s kind of unfortunate that they have become reified in the policies of one political party.

The future belongs to the young. Approximately 50% of America’s planning for the future, however, belongs to the old. Under these circumstances, is it any surprise that half the country refuses to treat climate change as a serious problem? From their perspective, the climate is only changing for other people.