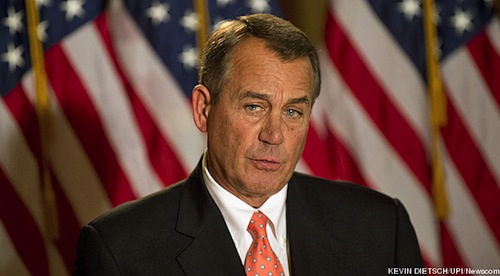 I’m just going to lie here, and you do whatever you want.

With sequestration just a few days away, congressional Republicans have drafted a plan to let the President apply $85 billion in cuts to defense and social spending. You might remember sequestration as the “I’ll clean the garage tomorrow” note of the legislative branch, now stuck to the refrigerator as a concrete reminder that Congress cannot achieve its own goals, meet its own deadlines or successfully negotiate with itself. Hence this offer to cede its authority. After twice failing and, now, staring down another collapse of will, our elected representatives admit they have a problem and appeal to a higher power.

Of course, $85 billion in military and domestic cuts might also be unpopular. After Congress failed to agree on spending cuts as a group, it created sequestration as a spur to action for the Budget Supercommittee, which also failed to agree on anything. Sequestration was supposed to force people into compromise by sucking so much. It turns out the architects of that plan were half right; sequestration would suck, and now that it looms the GOP is scrambling to ensure that it sucks on someone else.

Hence their offer to let Obama do it. It is a politically savvy move, but an intellectually dishonest one. Remember the last several years, when Obama’s spending priorities posed an existential threat to the United States? Back then—I’m going to date it from summer 2009 until Monday morning—congressional Republicans cast themselves as the last bulwark of fiscal sense. They were the only thing standing between this country and ruinous debt, and they would do whatever they could to fight it: criticize the President, filibuster his agenda, yell at him during the State of the Union—everything, it turns out, except propose meaningful spending cuts.

That was the thing Congress couldn’t do time and again, possibly because of those damned Democrats and possibly for other reasons. Now, after four years decrying Obama as the financial death of the United States, they want to give him unprecedented power over the budget.

It’s almost as if debt and federal spending were not so much important issues for the Republican party as handy cudgels. Obviously, the GOP cares about the deficit. They just don’t care enough to compromise with Democrats, which explains two things: the period from 2001 through 2008, when many of those same Republicans turned a budget surplus into the aforementioned deficit, and Monday morning, when it turned out Obama was not such a bad guy after all.

Congressional Republicans seem to have realized that the only thing worse than big expenditures is big cuts—politically, at least. Their willingness to pursue such cuts rhetorically, then use them as a worst-case scenario, then embrace them so long as the other guy takes the fall suggests a terrifying disjunction between politics and government. You would think that the GOP would treat sequestration as a golden opportunity to leverage the kind of hard fiscal choices they’ve been calling for since Obama took office. Instead, they have developed a clever plan to do nothing.

That’s the kind of thinking that constructs politics negatively, that treats any action as a potential mistake. It’s the thinking that arises from four years of obstruction and criticism, leavened with a fearful piety. The Republican Party is currently engaged in an internecine war of orthodoxy, and the purest members of the caucus are those whose conservatism is so unswerving as to become theoretical. The ones who compromise, who try to make conservatism happen in the legislative branch, are the ones who risk losing their seats.

Is it surprising that these people have concluded that the best way to win politics is to cede control of policy? It is the natural conclusion of a party whose ideology has shifted so far as to be incompatible with the modern federal government. Consumed by their outrage at the basic functions of Washington, the GOP has decided that it is better to rule in hell than serve in heaven.

Hell, in this analogy, is the House of Representatives. They failed, failed, created a mechanism to punish themselves for failure and now verge on failing again.

One would almost feel sorry for them, if only they finally made those cuts. As it is, they are like a smoker who says he’s going to quit, starts again, gets a tracheotomy, then moves his Red away from the hole long enough to blame Phillip Morris. It’s okay to screw up. It’s okay to complain that you’re out of power. But to screw up, blame power and then offer to cede what little you have is pathetic. Ladies and gentlemen, this is your Congress.