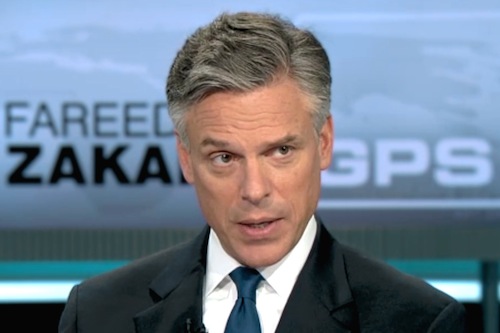 Jon Huntsman lost momentum after the Republican base realized that was just his last name.

Combat! blog endorsee and suicidally reasonable Republican Jon Huntsman has ended his campaign for the presidency, shocking no one. Okay, maybe he shocked the editorial board of the The State, the South Carolina newspaper that just endorsed him for the nomination. Everyone else was cool. Rick Perry is statistically more likely to find himself alone with Santorum and Paul, and the rapidity with which the whole field can order Chinese food will be compromised. Otherwise, it’s like hearing Foghat broke up. Huntsman wasn’t exactly a force. As the Hill puts it:

Although he came into the race with a fair amount of hype, his campaign failed to gain traction from the start. He struggled to gain momentum in the polls and fundraising. And he failed to shake off his association with the White House, given that he served as Obama’s ambassador to China.

Only in the Republican Party of 2012 would an association with the White House be considered an obstacle to the presidency. In fact, that Hill article might be a microcosm of the whole race.

As usual with the Hill, our first lesson is that no one is thinking about this stuff any too deeply. Clichés and conventional wisdom rule the day, as in the authors’ observation that Rick Perry “is still in the race and is expected to win the support of his loyal followers as the contest moves from state to state.” That is some toast-goes-in-the-toaster composition, right there. Yet much as in a haiku, even boilerplate description of the Huntsman campaign attains to the level of profundity. Consider:

Huntsman campaigned as a centrist Republican and promised to run a “civil’ [sic] campaign, rising above partisan politics. That argument never caught fire with the Republican base, however, who want [sic] to see President Obama thrown out of office.

Woe to civility during a year when losing an election equates to being “thrown out of office.” The early months of the campaign for the Republican nomination have closely resembled a pep rally: the focus has not been on who is the best player but on who can yell at the other team loudest. That’s only true for half the party, of course. The other half recognizes the need for a quarterback, and they keep picking Romney. But Romney has run some plays that kind of look like they’re from the other guy’s book,*

and so the crowd keeps looking at the bench to see which backup has his face painted.

Figuratively, Newt Gingrich is naked and completely covered in red body paint, and Santorum has “Christ Life” shaved into his head. Rick Perry is drunk in the stands. All of these people look foolish, and Ron Paul is playing basketball, but you can’t question their team spirit. You can only question their organizational skills, empirical reasoning, ethics and electability in the generals, but the generals are not what Republicans are about this year. In 2012, Republicans are about how much they hate that damn Obama and the mainstream media and pretty much the entirety of American society, which is somehow both majority-conservative and arrayed in a liberal conspiracy.

It’s Us against Them, in other words, and the Republican Party is narrowly focused on determining which guy is the most Us. If politics is traditionally the study and practice of power dynamics, the 2012 non-Romney GOP race—which has disregarded practical concerns in favor of ideology—is more properly classed as entertainment. Say what you will about Jon Huntsman, but he is not entertaining.

Perhaps he will end up Romney’s pick for VP, thus creating the most staid ticket in recent memory. Perhaps he will go back to being ambassador to China. The only thing that seems certain is that among all the candidates, he seems least likely to take a commenting position at Fox News, the entertainment wing of the Republican Party. As of Monday, January 16th, the current GOP field is Mitt Romney, Newt Gingrich, Rick Sanotrum, Ron Paul and Rick Perry, with Perry so dismal as to make no odds. Divide those candidates into “electable” and “entertainment,” and then tell me what the Republicans are doing this year.