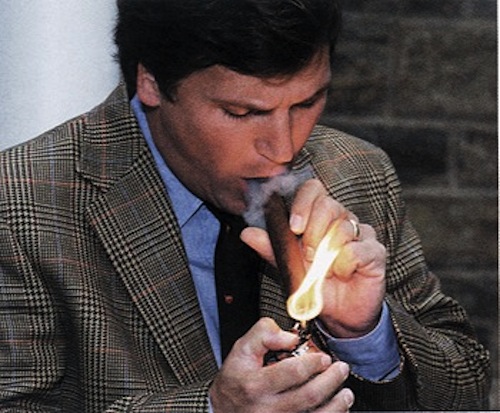 In an apparent effort to boost his popularity, conservative commenter and bow tie enthusiast Tucker Carlson has called for the execution of a likely National Football League MVP. Carlson was guest hosting Sean Hannity’s show on Fox News Tuesday night when he said that Michael Vick “should have been executed” for his dogfighting-related crimes three years ago. Whether this is the same as calling for the Eagles quarterback’s death—as our headline so cravenly suggests—is questionable. Obviously, the moment for a judge to hand down America’s first-ever death penalty for cruelty to animals has passed. One assumes, too, that when he went on the country’s most-watched 24-hour news network and said that should have happened, Carlson did not expect some sort of posse to rise up and—after he scrambled around and made it about 17 yards or so—kill Michael Vick in the street. Still: what if they did? Presumably, Tucker Carlson would feel bad. So why did he say it?

Before we speculate on that, let’s consider exactly what he said, since it sheds a useful amount of light on how he thinks and a fun amount on what a venal little bidder he is. Carlson was leading a panel discussion on the remarks of President Obama, who had commended the owner of the Eagles for giving Vick a second chance after his prison term. You can probably extrapolate how Carlson felt about that, which he put thusly:

I’m a Christian, I’ve made mistakes myself, I believe fervently in second chances. But Michael Vick killed dogs, and he did [it] in a heartless and cruel way. And I think, personally, he should’ve been executed for that. He wasn’t, but the idea that the president of the United States would be getting behind someone who murdered dogs?

Here’s a tip for you Kombat! Kids out there: always be sure to say “I’m a Christian” before you start talking about killing people on television. Also, if you think, personally, that people should be executed for killing dogs, you do not “believe fervently in second chances.” Pretty much every statement that Carlson makes above is contradicted by another statement that he makes above, except the acknowledgement that Vick was not executed. Perhaps it’s because he winds up with an odd number that he is forced to conclude with a statement-question.

Or perhaps it’s because he has advanced us little beyond the position, “The President got behind someone who killed dogs?” Considering that we started at “The President got behind someone who killed dogs and subsequently revived a professional football franchise?” one can argue that the addition of Carlson’s opinion has actually caused the discussion to regress. He’s told us what he thinks, accompanied by a series of positive assessments of his own character that seem to be directly contradicted by what he thinks, and if there’s reasoning behind it he’s keeping that part to himself.

I’m not sure how I feel about Michael Vick, other than I am certain he is better at football than at virtually all other aspects of human life. I really like dogs, and I really like football, and I can’t quite triangulate my position on Vick with respect to those axes. Probably, I couldn’t know what to think of him without Looking Into His Soul. That’s why I’m not on television talking about executing him.*

And so we return to our original question: why the fudge is Tucker Carlson doing that? The way I figure it, there are three plausible explanations:

1) The Google Alert Tucker Carlson has set up for “tucker carlson” has been going off a lot less lately, and he knew that calling for the death of an NFL quarterback around the time said quarterback is up for the MVP would make him more famous for a couple of weeks. If he hadn’t thought of Michael Vick, he would have called for the execution of Julian Assange.

2) Tucker Carlson is too much of a Tucker Carlson to care about any sport that doesn’t require horses, but when Obama came out in favor of Michael Vick, he suddenly developed strong feelings against the guy. Supporting Vick’s execution was the strongest way he could think of to disagree with the President.

3) Tucker Carlson is famous because this is the kind of shit he just says on TV with no reflection whatsoever.

For the life of me, I can’t decide which one it is. My midwestern cynicism urges me toward (3), but the simplest explanation often appeals only on the basis of its simplicity. Who knows what clanking apparatus ticks along inside Tucker Carlson? Even who-er knows what we should do about him, if anything. Probably, we should just keep doing this: