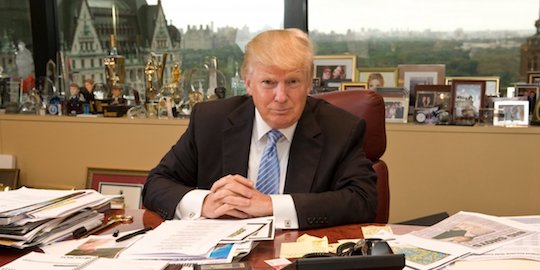 Now that the White House has ejected the Times from its press conferences, I must turn to New York’s second best newspaper for coverage of our confident and dynamic president. What will that serial monogamer get up to next? It turns out he’s going to keep spreading factual inaccuracies on Twitter, but it all seems more fun and crazy now, because switching from the Times to the Post is like scoring a movie with the Benny Hill Theme instead of Clair de Lune. Here’s the President of the United States:

For first time the failing @nytimes will take an ad (a bad one) to help save its failing reputation. Try reporting accurately & fairly!

So this may shock you, but President Trump’s claim is factually inaccurate. Although the New York Times did recently release a prominent new advertisement, it’s not the first time. Anyone who watched Comedy Central in the nineties1 remembers this commercial:

I forgot how much I hated that guy with the suspenders, but as soon as I saw him it all came rushing back. He’s a Chris Parnell character 20 years too soon. Anyway, the Times advertises pretty often, and President Trump seems to be speaking without regard for the truth. His main point is that the Times is bad, due to a shortage of fairness and accuracy.

That is, of course, the slogan of another news organization. “Reebok sucks,” he might have tweeted. “Try just doing it!” Such command of the language might send the delicate hands of New York Times readers clutching toward their pearls, but in the Post it reads pretty sweet:

The president also singled out the the [New York Times] in a tweet about fake news on Friday, saying “FAKE NEWS media knowingly doesn’t tell the truth. A great danger to our country. The failing @nytimes has become a joke. Likewise @CNN. Sad!,” he said.

His tweet came hours after Trump addressed a conservative conference where he wailed on the media about reporting fake news and the use of unnamed sources in stories.

I’ve said it before, and I’ll say it again: the Post is the newspaper for people who hate newspapers. I, for one, am heartened to read that the president has been wailing on the media, and it gives me hope that he might bring back jobs and convince chicks to loosen up. Anyway, I gotta go. I spent all day making money instead of writing Combat! blog, which I give away for free. Reader, it is worth every penny.