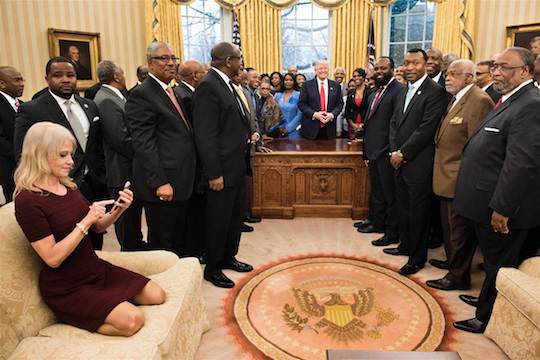 Kellyanne Conway sits on an Oval Office sofa in this photo by Brendan Smialowski.

As of this writing, the internet is aflame over the above photograph of Kellyanne Conway during a meeting between President Trump and the leaders of historically black colleges and universities. You should know that this photo was taken shortly after Conway took a picture with her phone, so she’s seeing how that picture came out rather than just ignoring black education to check Twitter. Still, her posture is weird. Are we to believe that she is shoeless? Or has she crammed her shoes between the cushion and the back of this Oval Office couch? There is something adolescent about her pose, or maybe…coquettish? It’s peculiar, is what it is, and this photo has become a lightning rod for interpretation.

The enemies of the people at NBC News have made this picture the occasion for my least favorite kind of internet article, the collection of embedded tweets. What if, instead of having to interview people, there were a searchable repository of short, pithy quotes on a variety of subjects? I would love that, because I hate doing reportage. But reporters should maybe dig deeper.

Yet this embedded-tweet story does not quite constitute egg-manning. Although the list contains pure Twitter personas like this lady, she has 25,000 followers.1 We’re not seeking out obscure arguments in order to make a story, here. Most of the tweets embedded come from recognizable names, including this from Mother Jones editor Clara Jeffery:

…okay, we’re not embedding it. Something about my last update is causing WordPress to read embedded tweets as block quotes, such that it does not embed them but does make their text gigantic and orange. Here’s Jeffery’s tweet quoted the old-fashioned way: 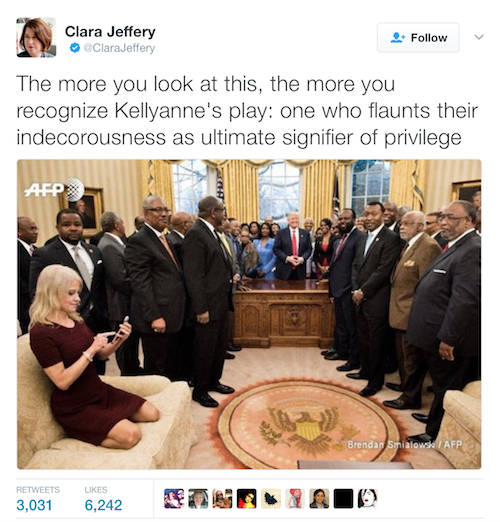 Usage issues aside, I think we can agree that the Oval Office may be a stronger candidate for “ultimate signifier of privilege” than sitting weird. Still, Jeffery’s interpretation raises an interesting point. How many leaders of historically black colleges and universities need to be in the room before everything you do in that room becomes a comment on race?

If Conway were sitting like that in a room with just President Trump and the dean of Howard, it would read differently. It would still be problematic, though. But what if it were Trump, the dean of Howard, the provost of Morehouse, three white ladies from the Ford Foundation, and Conway eating a six-foot party sub? Her behavior would be disrespectful in that context. But would it be the kind of disrespectful that we call white privilege?

In an introduction to a collection of her work, Suzan-Lori Parks once asked whether a black playwright could write anything other than black plays. Her argument was that even whites who are sympathetic to black people make blackness a totalizing identity, particularly in the arts but everywhere else, too. If Parks wrote The Odd Couple instead of Top Dog/Underdog, people would still interpret it as a play about the African-American experience. By extension, refusing to shake hands with all different kinds of people is rudeness or germaphobia, but refusing to shake hands with a black person is racism. From a white perspective, which makes whiteness the absence of ethnicity, any other ethnic identity becomes a master narrative.

This phenomenon might explain why Jeffery interprets Conway’s posture as a comment on her status relative to the black men and women around her—not the educators around her, or the White House guests. “Black” is still an identity that overrides all others, including professional accomplishment or political context. This is, I think, an example of how our society has moved past some elements of racism while doubling down on others.

I don’t think it’s a coincidence that the resurgence of white nationalism coincides with the prominence of so-called identity politics in academic discourse and public. We2 no longer cast aspersion on people based on their races. But we continue to make their races totalizing identities, perhaps not as hatefully but about as thoroughly as we did before. We have rejected the content of racism but preserved its structure. Blackness remains a totalizing identity, from a (mainstream liberal) white perspective. It’s just not bad. This paradigm is almost certainly an improvement on old-school racism, but it’s hardly good. It would probably be better if we saw Conway’s posture as weird rather than racist, since it might suggest we saw the other people in the picture as individuals rather than blacks.