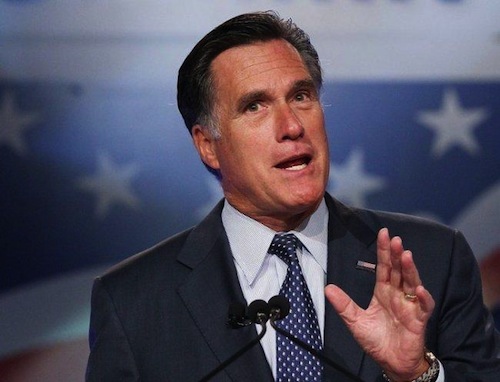 “What’s that direction people look in when they’re lying? I can look the other direction if you want.”

Much has been made over the last few days of the Des Moines Register‘s endorsement of Mitt Romney. The Register‘s argument is two-pronged: first, they believe that Romney’s plan of lower taxes and decreased regulation is the best way to fix the economy. That’s obviously true; when businesses and rich people spend money, it goes into the economy, whereas when the government spends money it goes into a deficit. Low taxes and deregulation are known drivers of economic growth—that’s why we had a massive economic collapse when taxes and regulations were at their lowest. But forget that. The second, more important reason the Register endorsed Romney for president is that he is the better candidate to “forge compromise” in Congress. David Brooks made the same argument over at the Times, and he sounded just as nuts.

Before we go on, I want to quote two sentences from the Register that reveal how much intellectual honesty went into their endorsement. In complaining that Obama tried and failed to revitalize the economy, they offer this:

The workforce is still 4.5 million jobs short of the nearly 9 million that were lost in the recession…Nothing indicates it would change with a second term in the White House.

I mean, come on—if you’re down nine million jobs and you’ve only made up 4.5 million in four years, how could another four years of the same policies make up the remaining jobs? The math is too complex for us to know.

It seems the Register is being willfully fatuous on this point, much as when they describe Bain as “a successful business that turned around failing companies.” If a company has “turned around” when it makes a profit for its investors just before disappearing into bankruptcy, then yes, Bain has turned many companies the hell around. But I’m not sure that’s the kind of turnaround we want for the United States.

It is, perhaps, the turnaround the Republican Party would like to see in the federal government. For the last four years, the GOP has fought tooth and nail and filibuster to ensure that Congress does nothing but cut taxes and buy defense, and on this record of intransigence the Romney compromise argument rests. Quote:

One of the biggest obstacles either candidate faces is partisan gridlock in Congress. It appears unlikely either party will have enough votes to have its own way without bringing over members from across the aisle. Early in his administration, President Obama reached out to Republicans but was rebuffed. Since then, he has abandoned the effort, and the partisan divide has hardened.

This characterization of what’s wrong with Congress is denotatively accurate, but it is connotatively dishonest in the extreme. To say that “either candidate” faces partisan gridlock in Congress is to ignore the obvious truth of where that gridlock comes from. For each of the last four years, Republican senators have used the filibuster excessively—far more often than in almost all previous congresses. Senate Minority Leader Mitch McConnell told reporters that his number-one priority as a legislator was to see that President Obama was not elected to a second term. The Romney compromise argument rewards his behavior.

Romney is well-positioned to negotiate with Congress because he is a Republican, and Congress needs negotiating because the Republican delegation refuses to work with a Democratic president. Ergo, we must elect a Republican president. It’s a valid argument, but it is morally unsound to a hideous degree.

Let’s say you dislike both candidates. Obama hasn’t done enough to fix the economy, and Romney is on video promising to ignore 47% of the country. All other things being equal, do you want to reward the party that has spent the last four years holding Congress hostage to the next election? If Romney wins, do we want Democrats in Congress to know that one sure-fire way to reinstall their party in the executive branch—more effective than reforming health care or killing Osama bin Laden—is to refuse compromise and block as much legislation as possible?

Imagine an American government in which the two parties trade control of the executive branch every four years, with each successive administration undoing what little the previous one did. The Romney compromise argument doesn’t advocate that system, but it takes it as a given. We should not vote for a man just because his party has proven willing to break government to get its way. The Republican delegation in Congress has acted terribly for the last four years, but it does not have to act that way forever. It’s not a habit until we reward it.