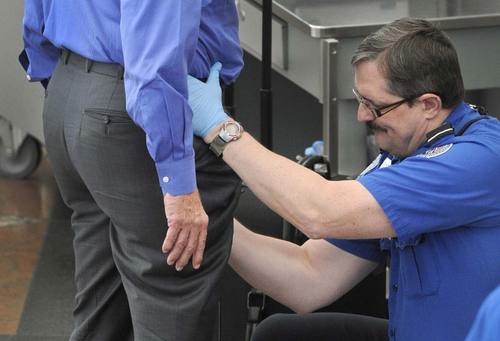 Here’s an unnamed “US security official” quoting the TSA’s advisory to foreign counterparts:

The Department of Homeland Security has identified a potential threat from terrorists who may be considering surgically implanting explosives or explosive components in humans to conduct terrorist attacks.

Then he disappeared in a cloud of colored smoke, leaving the rest of us to think about that scene in The Dark Knight and, you know, raise our families. The Times notes that “such a threat is likely to come from overseas rather than domestically,” possibly because surgery is cheaper and easier to get anywhere but the United States, but that’s not the point. The point is that, at least in theory, the dude in front of you at TSA screening who has neither cell phone nor keys could have a bomb inside him.

Or he contains just regular organs and black stuff—you can’t know until you open him up. It’s like Schrodinger’s Cat, if the way you conducted the experiment was by accusing everyone of being the cat until you found him.*

Obviously, there’s a lot of uncertainty involved in this situation, not the least of which is the credibility of our two sources, the Department of Homeland Security and terrorists.

Terrorists talk about wild new ways to blow themselves up the way kids talk about becoming a fireman. I’m sure they would love to surgically implant a bomb in the abdomen of a 19 year-old Jordanian who has carefully weighed his options and determined that the best way to please god is to murder as many strangers as possible, but terrorists would love a lot of things. Given their failure, thus far, to detonate a pair of underwear and shoes, I question their ability to perform surgery, much less explosion surgery.

Yet the TSA has gone ahead and warned us all anyway. Who knows whether this is some Code Orange shit or an actual, tangible threat? More pressingly, who knows what, if anything, we could do about it? Off in the distance, we glimpse the Castillo Limit. Consider which of the following theoretical Transportation Security Administration Policies you would accept:

I’m going to say yes to (3) and no to the other two, although I’m willing to hear arguments. Note that if you consider the DHS’s surgery bomb hypothesis credible, in rejecting (1) you are saying that skipping mandatory X-rays every Christmas is worth the possibility of eventually getting blown up or, better yet, getting several other people blown up. It sounds callous when you put it that way. If you could go to heaven and talk to Kaitlyn, the nine year-old girl who was wondering whether there would be a pony at Grandma’s house just before she was showered with terrorist skin and then fire, she would probably question your whole X-ray thing. From the perspective of a terrorist attack already having happened, any TSA safeguard seems like a great idea.

I think we have hit on a crucial element of the Castillo Limit, here. It’s in a different place depending on whether the terrorist attack is in the past or in the future. By extension: because the DHS’s job is to anticipate future terrorist attacks, the Castillo Limit is in a different place depending on whether you are the Department of Homeland Security. I personally am not, so I think this whole surgically implanted bomb business is bullshit. When the dude next to me in coach groans a little before a jet of fire shoots out of his belly button, I’ll admit I was wrong.