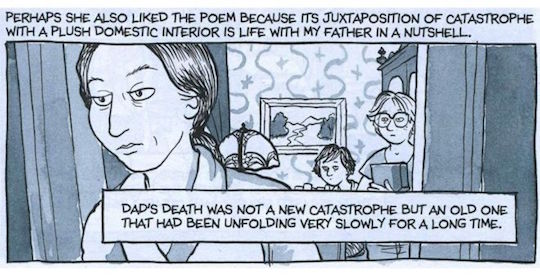 By now you have heard that several Duke University freshmen have publicly declined to read Fun Home, Alison Bechdel’s graphic novel about coming to terms with her sexual orientation while living with her closeted gay father. The objections began with incoming student Brian Grasso, who wrote on the Class of 2019 Facebook page that “I feel as if I would have to compromise my personal Christian moral beliefs to read it.” In an email interview with the Duke Chronicle, freshman Jeffrey Wubbenhorst1 objected to the comic book’s literally graphic depiction of sexual themes, saying, “The nature of ‘Fun Home’ means that content that I might have consented to read in print now violates my conscience due to its pornographic nature.” It’s his composition TA’s job to teach him how to simplify that sentence, presumably by assigning him Rudyard Kipling stories. Our job is to figure out why it’s so galling to learn the first official act of these new college students was to refuse to read a book.

It might just be because they’re Christians. If incoming freshmen had been assigned the aforementioned Rudyard Kipling, and students of color objected to his colonialist leanings, we might find their claims harder to dismiss. For those of us on the social and political left, a comic book that shows two girls kissing is a risible thing to get upset about, whereas the lingering effects of European hegemony are serious. If we’re laughing at church youths because they’re afraid to look at drawings of sex, we should rethink ourselves. As parochial as those objections might be, they are probably as legitimate as objections to a novel that stem from values more consistent with our own.

But maybe personal objections to a novel you haven’t read are not legitimate at all—at least not among college freshmen. It’s one thing to hate a book because it contradicts your values. It’s another to refuse to even learn what’s in a book, because the very act of reading it might “compromise [your] personal Christian moral beliefs.”

What do we mean by compromise, here? Is Grasso worried that reading “Fun Home” will cause him to lose faith in Christianity? Or does he only mean that he’s sure it will offend him?

I submit that neither attitude is compatible with the purpose of college as we understand it. If Grasso’s religious beliefs are so fragile they can be unmade by reading about sex in a comic book, they’re going to fare poorly during his freshman year. What happens when he drinks beer through a funnel and watches his roommate throw up while trying to unwrap a condom? Whither his God then?

The job of Duke and any other university is to challenge hell out of freshmen’s beliefs. Freshmen are dumb. They are children entering a quasi-adult world2 The signal experience of becoming an adult is changing your beliefs from childhood. First Corinthians 13:11 supports this claim:

The notion that protecting his existing beliefs could be more important to a freshman than reading a book contradicts our sense of what college is about. But that is because we are old. We believe in the project of liberal education and the proposition that college is fundamentally about becoming wiser and learning how to think about the world.

But if you grew up with the mindset that college is about learning the skills you need to get a good job, it makes perfect sense to skip Fun Home. What does learning about what it’s like to be gay have to do with engineering, or computer science or accounting?

The answer is plenty, since you’re going to have to go out in the world and make a meaningful life with whatever psychic materials you can get. We used to defend a liberal education for its own sake, as a matter of personal fulfillment rather than job placement. Knowledge is power. But lately, we’ve been telling kids that skills are power, and knowledge is your personal belief.

Our faith in liberal education has been fundamentally shaken. We all kind of suspect that college is bullshit now. But we still agree everyone should go there, so they can get a good job. Why should trade school change what you believe about life?