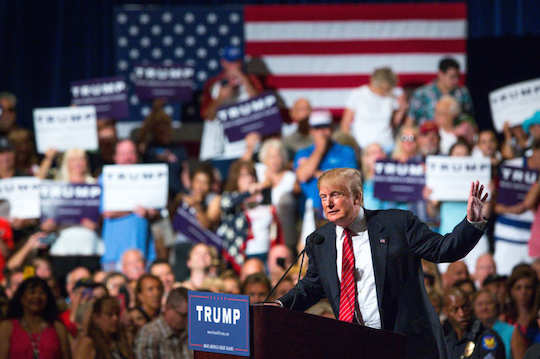 Donald Trump and a bunch of people who say he’s just what we need, not sarcastically

Six weeks after he shot to the front of the polls on a fluke response to his announcement-speech gaffe, Donald Trump is still the front-runner among Republican candidates for president. He is winning in spite of calling people stupid and rapists.1 He is winning despite a debate performance that would earn him a D in any high school speech class. He is winning despite the disagreement, among people who care about government, over whether his candidacy is comical or deeply alarming. Somebody supports him—ballpark, one in five somebodies who identify as Republican. Over at the New York Times, bless its gray heart, a team of political reporters has tried to find out who.

The good news is that they’re as mystified as anyone else. In addition to putting on a clinic in parallel construction, this paragraph gives us a sense of the bemusement Trump has caused over in midtown west:

In poll after poll of Republicans, Mr. Trump leads among women, despite having used terms like “fat pigs” and “disgusting animals” to denigrate some of them. He leads among evangelical Christians, despite saying he had never had a reason to ask God for forgiveness. He leads among moderates and college-educated voters, despite a populist and anti-immigrant message thought to resonate most with conservatives and less-affluent voters. He leads among the most frequent, likely voters, even though his appeal is greatest among those with little history of voting.

I don’t know about you, but I like my Trump supporters undereducated, ideologically extreme, and non-voting. The news that moderates and people formally instructed in critical thinking support his candidacy contradicts my basic picture of the Trump-loyal. But the Times concludes that “Mr. Trump has built a broad, demographically and ideologically diverse coalition, constructed around personality, not substance, that bridges demographic and political divides.” It’s a cult of personality, and as such it is immune to the contents of whatever the personality might actually say.

Before we go any further, the Times also found that most Republicans do not support Trumps candidacy and say they never will. Even in our wildest imaginings, he gets no further than an independent run in the general, which is presumably what Hillary Clinton thinks about in order to fall asleep. Trump is a 2015 phenomenon,2 and whatever he means, he won’t win the presidency in 2016.

So what does he tell us about how we live now? The bulk of the Times’s anecdotal evidence about his supports suggests they like that he “tells it like it is [a contest for the approval of your drunk uncle],” a phrase so ubiquitous we have almost tired of adding funny bracketed appendices to it. The consensus, at least among people quoted in this story, is that other politicians have been vitiated by some mixture of timidity and political correctness.

“We don’t need a politician for president; we need a businessman,” Tom Krzyminski, told the Times. “That’s what we need to get us out of the mess we’re in.”

You need vowels, bro. First of all, electing someone with no political experience to the presidency sounds like a great idea, but I can think of ways it might backfire. Second, “this mess we’re in” is what, exactly? Contemporary political economy? I agree that it’s messy, but I’m not ready to commit to getting out of it until I understand what else we’d be getting into. Living in 21st-century democracy has been problematic, but I’m not sure I would prefer to live in a Trump hotel.

But the two fundamental propositions of Krzyminski’s statement are that American politics are broken and American politicians are definitionally incapable of fixing them. Weirdly, these claims come from a man who is currently very interested in politics.

What we have here is an oppositional culture. It cuts across conventional demographics to unify people in a total critique of a system that, paradoxically, they are committed to fixing. Trump supporters aren’t calling for the installation of Trump as a fascist dictator. They hate the existing system, but they want him to be president of it. They want American politics without American politicians.

It’s almost as though they haven’t really thought it through. The feeling is real, though, and we ignore it at our peril. One in five likely Republican voters are so disillusioned with politics that they’ll support an obvious incompetent who disdains it, too. But they’re still responding to polls and threatening to vote in Republican primaries. They still love American democracy. They just want it to be completely different.