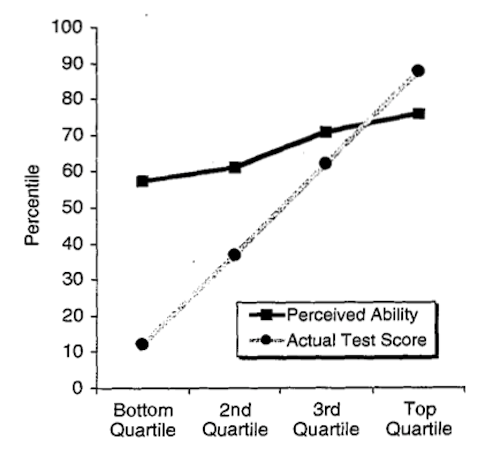 Judge Holden, the rad Satan figure in Cormac McCarthy’s rad hallucinatory western Blood Meridian, observes that “everything that exists without my knowledge exists without my permission.” A palpable satisfaction comes from naming things, particularly when those things are familiar but somehow yet nameless. Hence the beauty of schadenfreude, or the French expression for thinking of a witty comeback after the moment has passed, esprit d’escalier—”the spirit of the stairs.” Such terms are pleasing because they identify things we recognize but which previously blended into the larger field; they quantify experiences out of the miasma of life. I was therefore extremely pleased, yesterday, when I ran across the Dunning-Kruger Effect: the tendency of underskilled individuals to rate their abilities much higher than average, for precisely the same reasons that they are underskilled.

As Wikipedia pithily puts it, “this bias is attributed to a metacognitive inability of the unskilled to recognize their mistakes.” When you are new at something, or when you know very little about it for some other reason, you are much less likely to identify flaws in your own execution. Kurt Vonnegut put it more bluntly when he observed that “the big trouble with dumb bastards is that they are too dumb to believe there is such a thing as being smart.” It’s a familiar phenomenon to anyone has ever argued politics with someone who doesn’t follow politics, say, or taught an introductory karate class.

The genius of Messrs. Dunning and Kruger was to capture this experience in quantifiable, scientific data. Experimenting on Cornell undergraduates,*

they asked participants to rate their own abilities in logical reasoning, grammar and sense of humor. D&K then administered tests in same and correlated the results. Quote:

Across four studies, the authors found that participants scoring in the bottom quartile on tests of humor, grammar, and logic grossly overestimated their test performance and ability. Although test scores put them in the 12th percentile, they estimated themselves to be in the 62nd.

Even after they were shown the results of the tests, the bottom quartile continued to estimate their skills at above-average. Meanwhile, the best-performing quartile underestimated their own abilities. Those who found the tests relatively easy “erroneously assumed” that they were also easy for others. Presumably, that was a manifestation of the same phenomenon seen in the bottom quartile, who thought the tests were easy, too.

“The best lack all conviction,” William Butler Yeats wrote, “and the worst are full of passionate intensity.” The Dunning-Kruger effect doesn’t exactly explain a lot of recognizable experiences, but it certainly names them. Consider evolution-denial, for example—a situation where the people who know least about a subject are most confident in their arguments. There’s also this Amazon review of A Brief History of Time, in which the reviewer criticizes Stephen Hawking for being “unable to put his ideas in comprehensible language.”

For this reason, the reviewer believes that the book is an example of “the ubiquitous Emperor’s New Clothes syndrome we see so often today.” Finding himself unable to comprehend a book on theoretical astrophysics, he concludes that the whole thing is bullshit. Observing that many, many lauded ideas of the modern world are incomprehensible to him, he concludes that the whole era in which he lives is afflicted with a fatuous credulity. In this way, a particularly dumb person nominates himself as one of the smartest.

Stupidity and confidence go hand-in-hand, in other words. If I were a misanthropic curmudgeon, I might say that contemporary America—with its emphasis on self-esteem and its insistence that each one of us is Very Special—encourages this sort of thinking. But that would be to issue an unfalsifiable hypothesis. It’s not like there’s quantitative evidence that people outside the United States are less vulnerable to the Dunning-Kruger Effect. There is definitely not a 2003 article in Monitor on Psychology that says this:

Regardless of how pervasive the phenomenon is, it is clear from Dunning’s and others’ work that many Americans, at least sometimes and under some conditions, have a tendency to inflate their worth. It is interesting, therefore, to see the phenomenon’s mirror opposite in another culture. In research comparing North American and East Asian self-assessments, Heine of the University of British Columbia finds that East Asians tend to underestimate their abilities, with an aim toward improving the self and getting along with others.