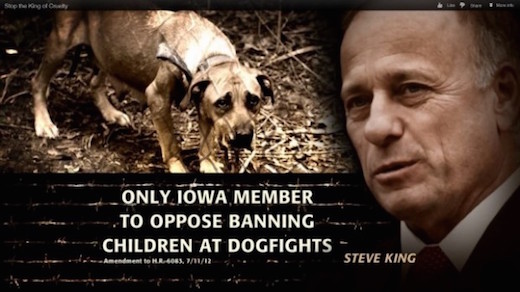 Still from another advertisement that may mischaracterize Rep. Steve King (R–IA)

Tea Party darling and Iowa delegate to the US House of Representatives Steve King has refused to publicly debate Jim Mowrer until the Democrat’s campaign stops running a “misleading” advertisement against him. According to the Sioux City Journal, King withdrew from a Sunday debate on Iowa Public Television over a television ad that alleges he voted against increasing the minimum wage and for increasing congressional compensation. King denies that he ever “voted to raise his pay or get free health care. “When Mowrer comes clean, I’ll clear my schedule for Sunday and debate him,” King told the Journal. Until then, voters can just sit tight and work with the information they have.

Super negative props to the Sioux City Journal for reporting this story but not bothering to investigate the claims in question. Way to ignore the most basic responsibility of a newspaper, you guys. Fortunately, private charity has rented the former home of the Fourth Estate, and the Annenberg Foundation’s FactCheck.org found that King did not vote to increase his pay to the degree that Mowrer’s ad claims.

So King is telling the truth, for once, kind of. He did vote to increase his own pay by a couple grand, but King insists it was only to cast “a vote against a broken House procedure barring all amendments on a huge spending bill.” It certainly wasn’t the twenty grand Mowrer’s ad says it was. This isn’t the first time an issue ad has mischaracterized King’s position, either. Two years ago, television stations in western Iowa refused to run a spot claiming that King opposed banning children from dogfights. Really, he just voted against a bill penalizing adults who bring kids to animal fights that are already illegal.

Don’t worry: he still voted to sue the president, voted against the Fiscal Cliff Compromise Act, and sponsored a bill to deny citizenship to children born in the United States whose parents are illegal immigrants. King is an enormous asshole. He’s even an asshole when he’s right, as his ongoing refusal to debate Mowrer suggests.

With just over two weeks until Election Day, King’s ultimatum amounts to a refusal of any further debate. He’s supposed to meet Mowrer in Storm Lake on Thursday, but he’s threatened to skip that one, too. Much as he did when he voted to shut down the government last fall, King is making the public suffer in order to put pressure on his political enemies.

He’s not the only one. Here in Montana, fellow bulwark against government Rep. Steve Daines refused to debate his Democratic opponent in the race for US Senate unless they met on specific and very limited terms. For most of September, Republican House candidate Ryan Zinke said he wouldn’t debate Democrat John Lewis, although he finally relented. Twenty years ago, a candidate for national office refusing to publicly debate his opponent would be unthinkable. Suddenly, a basic step in the democratic process has become a bargaining chip.

It’s fun to speculate on why that is. The uncharitable answer, which is tempting in light of King’s record as an orator, is that these candidates are too dumb to risk engaging their opponents’ ideas in real time. I don’t think that’s true, though. Certainly King is dumb in some respects, but it’s almost equally certain that he doesn’t think he is. I think the more likely explanation is that these candidates have decided that debates matter less than television advertisements.

That’s the calculus at work in King’s ultimatum. He seems to believe that Mowrer’s 30-second spot will influence more voters than the remaining debates—or at least more than his refusal to participate in them. By extension, that suggests he regards his own ad budget and spending from legally unaffiliated PACs as more important than the traditional mechanisms of American democracy.

Last week, King all but declared that he considers the dirtiest element of contemporary politics more important than public discourse. He might be right. With a 13-point lead in the polls, he seems intent on shutting down the race two weeks early—at least the part of the race that might give voters new information. It’ll be sad if that works.