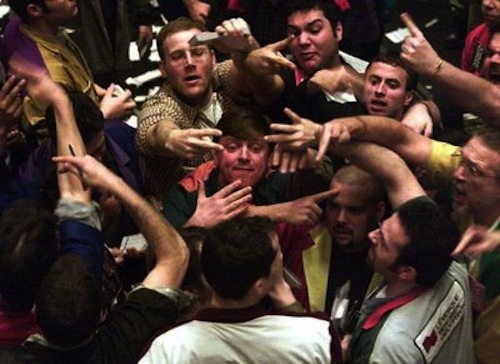 I don’t know if you follow the markets, but it’s been one hell of a week. The Dow lost nearly five percent of its value yesterday, following another day of steep declines likely precipitated by S&P’s downgrading of the US federal credit rating last Friday. That move shook investor confidence—as did the decision of certain commentary blogs to cover mean campus organizations in Pakistan instead of the most significant financial event of the year—and confidence is what makes a modern market go. In an economy based on making things, growth is spurred by demand. In an investment economy, somewhat tautologically based on making money, growth is spurred by demand for investments. The more people think a stock market is going to do well, the better it does, and vice versa. Today—as of 12:38 Eastern, at least—a bunch of people decided that the Dow would probably go up, and it did. Which begs the question: why don’t we just have confidence in the market and watch it go up?

That doesn’t work, of course. As anyone who had acne vulgaris in high school will tell you, you can’t just be confident. As with religious faith or romantic attraction, you can make conditions more or less conducive to confidence, but it’s mostly something that just happens. There is no verb form of “confidence.” You either have it—and it probably comes true—or you don’t and your doubts are probably confirmed. This unavoidable truth creates the odd phenomenon by which the market—a human-made entity animated entirely by human choices—acts in ways that are totally beyond our control.

In this regard, the market resembles that other dumbly powerful multicellular organism, the United States Congress. Congress is almost certainly to blame for some of S&P’s decision, which is as much a referendum on the the federal government’s ability to solve problems in general as it was on this particular problem. Had the House and Senate quietly raised the debt ceiling as they do almost any other year, it seems unlikely that Standard and Poor’s would have chosen this particular moment to lower our credit score.*

Yet as much as Congress can be blamed, no individual congressperson is really responsible for the debt ceiling crisis. Their dipartisan game of chicken with the country’s future was a monument of depressing cynicism, but that cynicism, too, is an expression of a fundamental loss of confidence.

The idea that the nation’s leaders have lost confidence in the nation’s government is dizzying. But in your heart of hearts, how confident are you in federalized, massified America right now? Is this a smarter, more effective Congress than we had in 1992, or is it less so? Are we a stronger people of better character than we were in 1948, or have we gone a little soft? Such comparisons are pointless; we need to look after the country we have, and there’s no reliable way of knowing what the country used to be anyway. What you do is what you are. Yet what we do individually—and therefore where we go collectively—depends in large part on what we think of ourselves right now.

I was just in Canada, where public courtesy is palpable and the girls make a lot more eye contact. As I watched airport CNN footage of massive selloffs and Mitch McConnell looking like a turtle trying to stuff as much cash into his shell as possible before he buries himself in the sand, I felt just the slightest temptation to stay. But that is bullshit, just like the Canadian money with ducks on it. We are America; our money has eagles on it, and the eagle does not think about whether he is endangered as he plummets to the earth. He stays focused on the fish or the rabbit or whatever, and then he rips its eyes out while staring malevolently from the highest point he can find and making various crazy head movements.

Probably, in the midst of our three-year loss of confidence, America has also suffered from overconfidence. I, for one, operate with that general sense that things will be okay no matter how stupid our patricians and how Crocs-encrusted our hoi polloi. But this too, dear reader, is bullshit. We are the America we will get for our lifetimes, and there will eventually come a time when our confidence will have to be determined by what we do and not the other way around. Maybe that time is far in the future, and maybe it will be next year. Sooner or later, though, we will need the confidence that comes from accomplishment, from doing something whether you think it’s going to work or not. Trying to guess and then waiting for it to happen is the privilege of the comfortable, and we will not be comfortable forever.